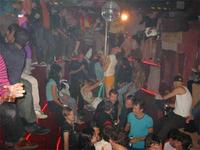 Billy informs me that ‘gelatin’, the artists group responsible for the giant pink rabbit on the Italian mountain were involved in the first 2 Liverpool Biennials. He’s rummaged about in his archives and found this picture and review by Souab Khan of their ‘armpit club’ installation on Duke St. in 2002. I thought it would be good to re-post it here just for the record.

Hedonistic artists have recently been pushed aside by the business-savvy culturepeneur hanging out at Groucho’s with pop stars. In bringing Gelatin back to Liverpool, the independent has proved the dream is still alive. Imagine, if you can, the coliseum set indoors; late 70s New York meets 20s cabaret the size of a paddling pool. Add to the picture 200 sweaty people clambering up and down carpeted steps, with two tall Austrian men dressed in Mickey Mouse leotards, with their testicles out and entertaining the crowd. To finish the scene, add in the occasional banana fight, pole dancers and Dr. Strangelove let loose on a synthesiser. This was The Armpit, at the back of LBK on Henry Street, which, in its four days, became a mythical place. This is fairly normal for Florian, Wolfgang, Tobias and Ally, the four members of Gelatin. Their previous work has included masterpieces such as ‘The Oesophagus’. This involved visitors paying to be covered in baby oil, climb a 20-metre tower, and stand over a tube lined with 25 obese people also covered in baby oil. Then they were slowly forced through the pipe, squeezing past the oily flesh to be dumped on a mattress at the bottom. The visitors would go again and again. You sense that Gelatin still have a childish sense of awe about life. Ally will jabber about the transvestite in Arizona who asked them to house-clean in the nude. Tobias, at seven, paid for a prostitute to undress for him. In their work, they project the comfort of their own sexuality onto strangers, who in turn feel at own with their own. The lucky few who got to The Armpit, some of whom had never been to an exhibition, have now been to one they will remember. What’s any of this got to do with art? Gelatin is punk music, guerrilla cinema – using wood, rails and bits of old carpet.