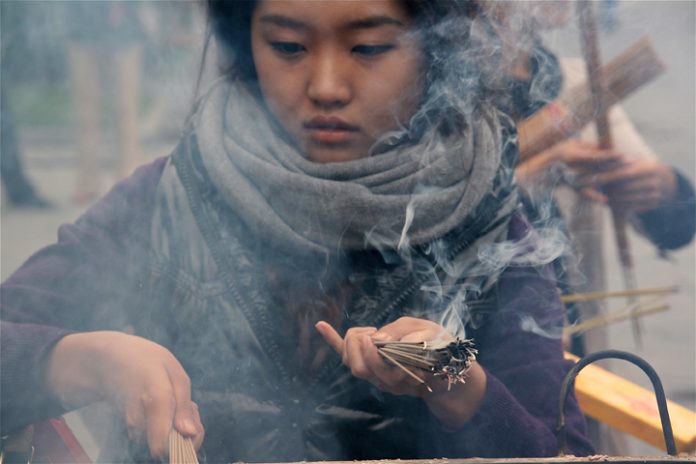 Mold based photographer Peter Mearns has had his work selected for a major International Photography Festival. Look/17 takes place in Liverpool between 7 April – 14 May and the theme is China & Urbanization.

His exhibition is entitled “What You Imagine You Create” (a saying of the Buddha) and his images show local people worshiping in Buddhist Temples in Chinese cities. They can be seen at Egg Space, Egg Café, 16-18 Newington (off Bold Street) Liverpool L1 4ED.

Peter said “My response to the theme of China & Urbanization examines elements of societal control that impact on people’s everyday lives in China today and the control they choose to exercise themselves through religious worship as a way of coping with life’s urban pressures.

The urban environment is becoming humanity’s most prolific of creations. Since 2010 over 50% of the world’s population are city dwellers and nowhere is this shift more widely apparent than China.

In 1949 the communist party declared the state to be the new church and banned religion for 30 years. Today, worship is permitted and Buddhism is growing rapidly.”

Ying said “This festival centres on the theme of urbanism and the challenges we face globally and locally. We are living in a shifting world that changes and where interactions take place on a daily basis. I believed artists play an important role in inventing their own universe, and re-inject the liveliness into the world we live in. They respond to the world and bring our attention to particular subject matters that are worth thinking through.”

Issue #2 of Art in Liverpool magazine is out this week