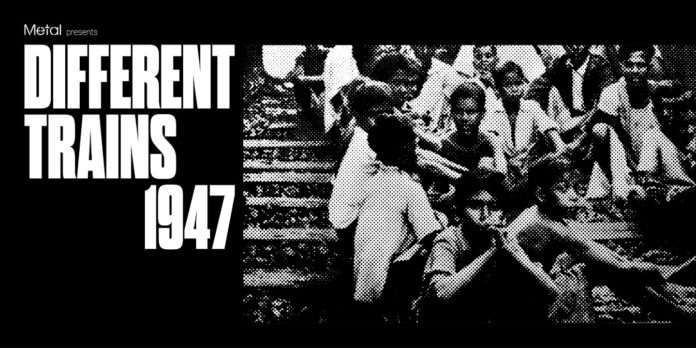 Different Trains 1947 is presented by Metal, in partnership with Warp Records, Barbican Centre, and Boiler Room, plus Indian partners Wild City and What About Art?

The piece is inspired by Steve Reich’s innovative 80’s composition Different Trains, and the stories of those who lived through the events of 1947, with new visual work from award winning film-makers, Iain Forsyth & Jane Pollard (20,000 Days on Earth), featuring material from the BFI National Archive’s unparalleled collection of rare films of pre-Independence India which have survived from the earliest days of cinema.

Reich’s original piece recounted experiences of U.S + European train travel during World War Two and, in this forthcoming work, these artists will revisit this central idea to explore stories from the UK and India, during the period of Indian Independence.

“I’ve taken the opportunity to approach this piece from a really personal place” says Indian electronic artist, Sandunes.“My grandfather was from Karachi, Pakistan and moved to Bombay in 1945. I felt moved to tie 1947 into the piece through his story and will be using sections from an interview recording with my Grandmother as one of the main themes within the piece”. I think it can be really purposeful using artistic pieces to shine light on parts of history that are often not talked about. That partition of Indian brought about the largest mass-migration in human history, is not a well known theme“. “The train system in India has been a critical part of its identity and remnant of the colonial period”. Vocalist Priya Purushothaman elaborates further.  “[the train] forms a vital arterial network that now represents the only truly egalitarian connection between all corners of the country, all classes and creeds of people. During partition, the trains served as a lifeline to transport people from their home spaces which had once been safe to a new home that was a huge unknown”.

Sandunes, Priya and Actress (Ninja Tune) will present alongside Jack Barnett of These New Puritans and percussionist Jivraj Singh (drummer Parekh &Singh / Pinknoise). “We exchanged thoughts on the theme of the project and he told me the raags (musical scales) that he was interested in exploring”. Priya tells of the collaborative process with Actress. “I demonstrated different raags and taals (time cycles) and we discussed the moods they created and the cultural associations that came with them (like the idea that raags are based on time cycles). Our process expanded more after he went back to the UK and we exchanged sketches of ideas, musical and thematic, to which I could react from my musical idiom. The process is like a conversation between our musical styles to see how they may fit together like pieces of a puzzle.”

Maritime Museum – China: Through the Lens of John Thomson 1868...