I braved the awful weather this evening to bring you a film review no less. Sadly not many other people made it to this first in a series of four Avant-garde film nights at the Cornerstone building, Hope University.
These are old 16mm films so I suppose it was inevitable there would be some technical problems, the show started a bit late and then finished early as the final 30 minute film, Castle II by Malcolm Le Grice could not be show (problems with the spooling apparently). 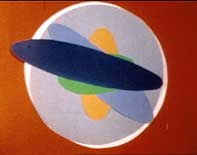 They’re not called Avant-garde for nothing, its a far cry from the standard cinema experience, They challenge your patience and your eyes – lots of strobing.

The series is supported by the Cornerstone gallery and Hope University and is curated by James Harding and Edda Markus. They said:
This screening will introduce some of the films which have helped to define British avant-garde cinema. The 7 films, although varying in style and approaches, utilise and challenge the material of cinema
itself. At times intensely beautiful, as with Michael Maziere’s filmic reaction to the paintings of Cezanne, at other times politically charged, as in Malcolm Le Grice’s ‘Castle II’

I enjoyed John Latham’s ‘Speak’ though it was a long 11 minutes. They probably look a bit dated now, certainly lo-tech but remember some of these were made when we thought lava lamps and soap bubbles were cutting edge.

Hope to see more people there for the next one in December, its Free and there was free wine and crisps afterwards too!