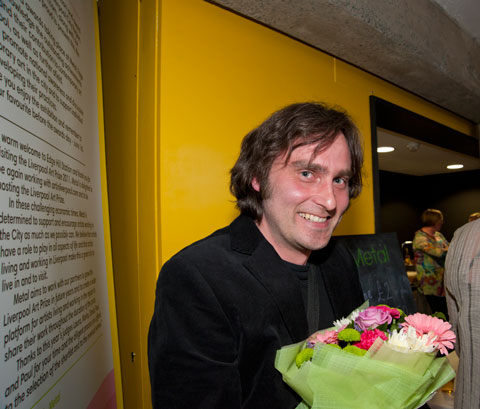 Markus will be awarded £2000 and will also be given the opportunity to show their work at the Walker Art Gallery.

Visitors to Metal at Edge Hill Station have also voted on their favourite works. The £1000 People’s Choice Award was awarded to Brendon Lyons.

Representing the best and most cutting-edge contemporary art being produced in the region Markus won for four multimedia works, situated mainly in the context of installation and the moving image, incorporating video, 2D and 3D animation.

For the Liverpool Art Prize exhibition Soukup produced new work that deals with the construction and deconstruction of film, language and motion. Through this work he is exploring how one element or its position can influence the whole, and vice versa. In the 5 channel video installation ‘Chair Chair Sit In between’ Markus himself performs, referencing slap-stick and early movie pioneers, yet playing with the language of film and its boundaries, deconstructing the elements to a basic action and reaction in sound and vision.

Fascinated by the screen as a window opening up to a virtual space, Markus searches for a way of incorporating new technologies to install or position ‘situations’ or ‘mental objects’ in both real and virtual spaces.  Other areas of his work are digital photography, typography, graphic and interactive design, field recordings, sound design and electronic music.

Arriving in Liverpool for the 2008 Capital of Culture year, Markus says “I felt always very welcome and accepted here as people are very open and talkative. I like it as it is not pretentious, people are themselves and keep positive even if situations are not easy”. Markus’ dedication to and admiration for Liverpool is indicative of the strength of the thriving art scene and the city’s importance as a contributor to the international contemporary art community.

On receiving this prestigious award Markus said ‘I am totally overwhelmed. It’s just amazing. I was happy to be shortlisted and to show my work at the exhibition. I’ll have to start thinking about the new work I’ll need to create for The Walker as part of the prize!

This year’s winner was drawn from shortlisted artists: painter and installation artist Brendan Lyons, painter  Bernadette O’Toole, installation specialist Richard Proffitt and new media, film and sound artist Markus Soukup.
Jenny Porter Curator at Metal said “Every visitor to the gallery seemed to have a different favourite! The artists have all worked really hard and they have all made new work for this exhibition.”

Prior to the ceremony, the panel of expert judges including Laura Davis, Arts Editor at the Liverpool Daily Post, Paul Domela, Curator of Liverpool Biennial, Moira Lindsay (Curator from The Victoria Gallery and Museum), David Jacques (Liverpool Art Prize 2010 winner) and Paul Hyland a representative from Duncan Sheard Glass, one of the exhibition’s sponsors, met at Metal to assess the exhibited works together and made their final decision on who was to win this year’s prize. The artists have all created their pieces on site and some work specifically responds to and resonates with the unusual architecture of the gallery.

Mike Stubbs, Director of FACT presented the award, he said “Liverpool Art Prize has become a highlight on the city’s cultural calendar and is an increasingly important opportunity for professional artists to test their principles and latest work in front of a wider audience. There is an authenticity and closeness between the public that comes to vote and the artists that keeps Liverpool Art Prize grounded, creating a real opportunity for Liverpool to celebrate its visual arts without too much pomp but a little ceremony.”

An after-party was held at LEAF on Bold Street, attended by the artists, judges and those involved in running this increasingly influential art prize.

Artinliverpool.com founded the Liverpool Art Prize in early 2008, it was one of the first major visual art events in the Capital of Culture year. The Art Prize is now a firmly established part of Liverpool’s annual arts diary, acknowledging the outstanding achievements of local artists and their contribution to contemporary art. It aims to promote national awareness and discussion of contemporary art in the city and to support individual artists in developing their practice.

Poolside Emergency at The Bluecoat

NXNW Festival, Wigan – ‘The Way We Are’ exhibition