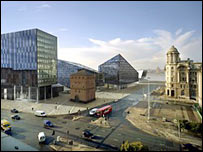 An exhibition of the planned multi-million pound re-development of Liverpool’s waterfront has been put on show at the city’s Maritime Museum.

Visitors can experience a computer animated ‘fly through’ of the Mann Island changes, said developers Neptune and Countryside Properties.

Building work is to start early in the new year.

The exhibition is open until 21 December and visitors can leave their comments in a special book.

Plans for the Mann Island site include a new £65m Museum of Liverpool, an extension to the Leeds Liverpool Canal, a £120m mixed-use development as well as improvements to areas for public use.

The new waterfront scheme is expected to create over 800 new jobs, as well as increase the number of visitors, said the developers.

Live Jazz every Sunday at the Walker Art Gallery