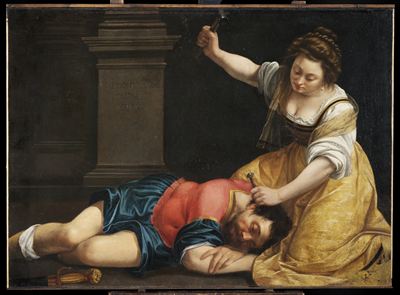 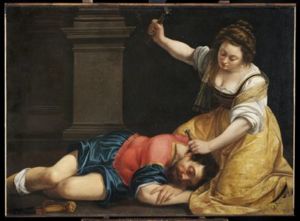 Fascinating works by two giants of art history go on display at the Walker Art Gallery from Wednesday 24 October until February 2013.

Mother and Child (1905), a delicate and tender watercolour of his lover by a young Pablo Picasso and Jael and Sisera (1620), a dramatic and striking biblical scene by Artemisia Gentileschi, are both on loan to the gallery from the Museum of Fine Arts (Szépmüvészeti Múzeum), in Budapest.

Sandra Penketh, Director of Art Galleries said: “This is an amazing opportunity to see art works rarely seen in Britain. The fact that we have been able to secure these two pictures on loan is evidence of the Walker Art Gallery’s reputation as one of the best galleries in Europe. We are very grateful to the Museum of Fine Arts, Budapest for loaning us these two treasures from their collection.”

Picasso’s Mother and Child arrives in time for his birthday (25 October 1881) and takes the centre of a small display of work by the artist, which includes three pieces from the Walker’s own collection: a drawing, Pau Cucurny with a dog (1903), and two Picasso prints from 1947 and 1951, showing how his style developed.

Mother and Child was produced during a significant phase in Picasso’s early career, when he moved between Barcelona and Paris from 1901 and 1907. During this time Picasso experimented with different techniques and styles moving from Blue Period to Rose Period, before his revolutionary Cubism.

By the time Picasso drew Mother and Child he had settled in the heart of Montmartre, Paris. He was penniless and about to embark on his first long-standing, though volatile, relationship with his lover, model and artist Fernande Olivier. Her portrait is drawn on the back of Mother and Child, though the watercolour itself is likely to touch upon an event in the life of a previous model and mistress, Madeleine, whose features continued to haunt Picasso’s work, even after he had shifted his attention to Fernande.

Painted some three centuries earlier, Jael and Sisera by Artemisia Gentileschi depicts the murder of Canaanite general Sisera at the hand of Old Testament heroine Jael. The tense scene captures Jael just before she drives a nail through the general’s temple. The macabre painting is a great example of the dramatic and violent subjects which made Gentileschi popular among collectors in Florence and Rome, and the most celebrated female painter of her day.

Like most other women artists of the time Gentileschi was the daughter of an artist. As a teenager she was raped by one of her father Orazio’s assistants, Agostino Tassi, for which Tassi was tried and imprisoned. The tenacity of this young woman in a male-dominated world, as well as her artistic legacy, has made Artemisia a modern feminist heroine.

Both Mother and Child and Jael and Sisera are on loan to the Walker Art Gallery as part of a reciprocal agreement with the Museum of Fine Art, Budapest. The Walker’s Landscape with gathering of the ashes of Phocion by Nicolas Poussin and The Murder by Paul Cézanne have been loaned to Budapest’s exhibition, Cézanne and the Old Masters from 25 October until 17 February 2013.

International Slavery Museum to use Grant to Develop Collections

ON VIEW – RARE CHANCE TO SEE THE WORKS OF CELEBRATED...