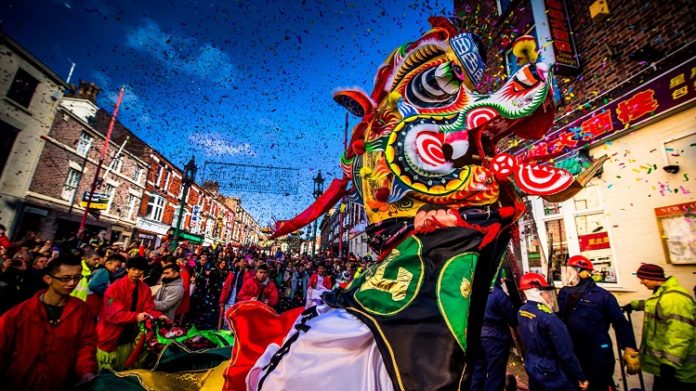 Celebrations for Chinese New Year are going to be ‘Pig’!

The city’s Year of the Pig festivities will start on Friday 8 February with a focus on the Chinese arch, which was gifted to the city by Shanghai twenty years ago as a symbol of the twinning relationship.

From 7pm on the 8 and 9 February, there will be lion dancing and Chinese influenced street theatre in and around the arch, which will build up to a unique projection and pyrotechnic show at the arch, and on surrounding buildings. Called The Quest for the Arch, the projections follow the journey of a little girl and a pig from Shanghai to Liverpool.  The soundtrack will provided by musician and composer Jah Wobble and will feature a live element to the performance. It will end at around 7.45pm.

The Chinese arch street entertainment, the lumiere and pyrotechnic show will also take place on Sunday 10 February from 6pm.

Building up to Sunday’s main day of celebrations, from 28 January, thousands of Chinese lanterns will adorn city centre streets and Chinatown, and a number of buildings including St Luke’s Church (the Bombed Out Church), Everyman & Playhouse Theatres and Sefton Park Palm House will turn red in homage to China.

Sunday (10 February) will see the usual traditional celebrations take place, which last year attracted around 25,000 people. They include a number of street and stage performances, family workshops, a fairground, parades, firecracker displays and of course the popular Chinese market on George Street selling gifts, souvenirs and mouth-watering Chinese food. 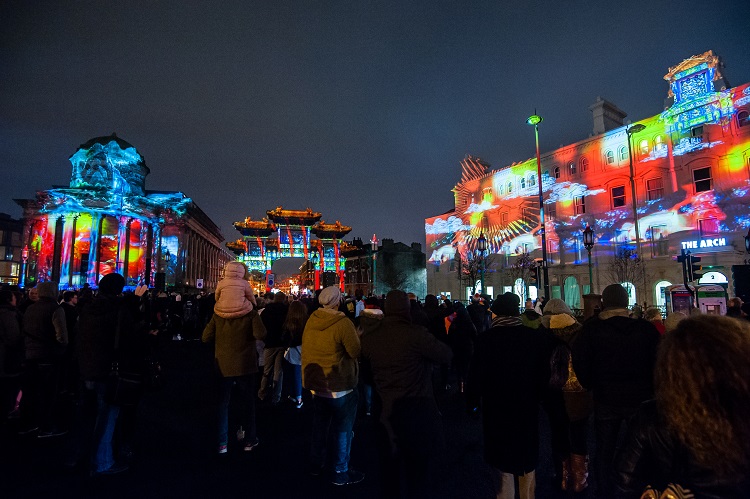 The family friendly activities will start from 11.30am and take place in and around Great George Square and Nelson Street.  The event will end at 6.45pm.

“This is a particularly special year as it marks the 20th anniversary of our twinning with Shanghai. This global friendship was built on historic trade links, and today we maintain a partnership with China which furthers investment and development for both parties.

“The projections will, literally, shine a light on the arch – a symbol of our friendship. We have seen in previous years how popular the lumiere is – and this year’s beautiful work will be no exception.

“It will undoubtedly be a wonderful few days and an opportunity for people to come together to celebrate our much-loved Chinese community.”

Digital experts Illuminos have created the lumiere ‘The Quest for the Arch’ in partnership with Pagoda Arts, First Take and Jah Wobble.

The full list of buildings lighting up red are:

Museum of Liverpool: Huge Liverpool Tapestry to go on display