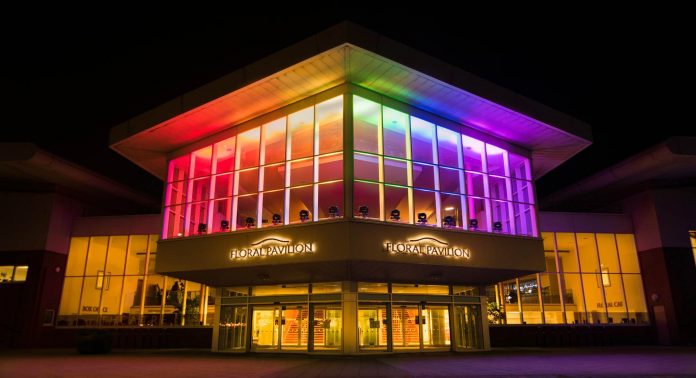 Liverpool Pride will shine a light on diversity again this summer with the return of the stunning project Come Out of the Shadows.

Pride organisers are appealing for as many of Liverpool’s most iconic buildings, venues and city businesses as possible to join the event and be lit up in the colours of the iconic Rainbow Flag – helping make Liverpool the most visibly LGBT+ city in the UK.

Last year Come Out of the Shadows grabbed the public’s imagination as more than 30 of city region buildings were illuminated to raise awareness of LGBT+ hate crimes and to showcase Liverpool as a visibly LGBT+ friendly city.

Now Liverpool Pride organisers are hoping even more of the city’s landmarks will be bathed in rainbow colours this July, or show their support by displaying the iconic Rainbow Flag.

This will showcase Liverpool, both inwardly and outwardly, as an inclusive, diverse and tolerant LGBT+ friendly city, while at the same time helping to educate, raise awareness and normalise LGBT+ in all its forms. The overall aim is to make Liverpool a safer place for residents and visitors alike.

Liverpool Football Club is also backing the initiative once again after successfully lighting up the Kop in 2016.

And in the wider City Region, the Atkinson at Southport, Crosby Library, New Brighton’s Floral Pavilion, and the Steve Prescot Bridge in St Helens are among locations taking part.

Meanwhile, Come out the Shadows (COTS) will also include a public exhibition featuring LGBT+ communities in L1 from July through to early September. This will promote and showcase each individual community, raise awareness of the COTS campaign and promote the Straight Ally flag, which is a way that non-LGBT+ communities can show their support for LGBT+ equality and diversity.

Liverpool Pride’s Michael Carey said: “Come Out of the Shadows is about highlighting the city region as one that is tolerant and visibly LGBT+ friendly. We believe that discrimination in any form is unacceptable and created this lighting strategy to celebrate equality and diversity.  Liverpool Pride invites all building owners, venues and businesses across the City region to contact us, pledge your support and help us to shine even brighter!”

This year’s official Headline Sponsor of Liverpool Pride Festival is Barclays, who are embarking upon a 12-month community partnership which will provide access to employment, financial services, and, access to training for digital and financial awareness supported by the many Barclays colleagues across its branch network and contact centres in Kirkby and Wavertree Technology Park.

Barclays have already been announced as the headline sponsor for this years Liverpool Pride and they are fully supportive of Come out of the Shadows,

Mark Armario, Director of Premier, Barclays UK said: “As we build on our partnership with Liverpool Pride, supporting Come Out Of The Shadows is another way in which we show our commitment to the LGBT+ community.  At Barclays we want our colleagues, customers and clients to feel free to express who they are at all times. We’ve made great strides internally in creating an inclusive global workplace, but we want to go further. By supporting Liverpool Pride and the Come Out Of The Shadows project, we’re saying “this is who we are” and we want to encourage everyone else to be able to say who they are, without fear.”

Liverpool Pride – the region’s annual LGBT+ festival – is now one of the major events in the city’s Summer events programme, attracting more than 25,000 people.

Now in its eighth consecutive year, the festival will take place across two days – Saturday 29 July and Sunday 30 July. The theme of this year’s Pride is International Love, complementing the city’s wider 50 Summers of Love festival, which celebrates 50 years since the decriminalisation of homosexuality.

If your venue would like to support the Come Out of the Shadows initiative, now or in future years, please contact michael.carey@liverpoolpride.co.uk

Keep up to date with Liverpool Pride’s new announcements at:

Towards a new Urbanism – Symposium