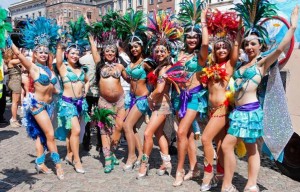 Sparkling samba dancers from Liverpool Samba School, who this July will be at the forefront of the fun at Liverpool’s annual Brazilica festival, last weekend flew to Copenhagen to participate in the Danish capital’s famous Carnival, dancing in the giant parade and entertaining revellers across the city alongside Carioca de Copenhague School of Samba!

In what proved to be the perfect warm up for the Brazilica festivities – which this year last longer than ever with a 9-day programme of events leading up to the main carnival day on Saturday 20 July – the ladies are hoping Liverpool will be blessed with similar sunshiny weather to that enjoyed by Copenhagen last weekend. But rain or shine, the samba shenanigans will go on!

Brazilica attracted over 60,000 visitors to Liverpool City Centre in 2011 and 80,000 in 2012 and organisers Liverpool Carnival Company and Orb Events anticipate that this year’s event will be the best Brazilica yet, taking over the entire city centre on Saturday 20 July.  Brand new for 2013, a programme of events at various city venues starting on Friday 12 July will warm the city up for the main carnival and parade day.

Carnival day itself (Saturday 20 July) will once again be situated in Williamson Square where visitors can expect to find the best selection of Latin American food and drink as well as listen to authentic Brazilian musicians throughout the day.

The carnival parade will take place on the evening of Saturday 20 July and since 2008 has included samba groups from countries as wide-ranging as Brazil, Singapore, France, Holland, Ireland, Germany and Spain, with prestigious bands such as Paraiso School of Samba (who featured heavily in the 2012 Olympics Closing Ceremony) getting involved.

More information can be found at www.brazilicafestival.com
Keep up-to-date with Liverpool Carnival Company’s events on Twitter at: http://twitter.com/brazilicafest

A New Look for artinliverpool.com