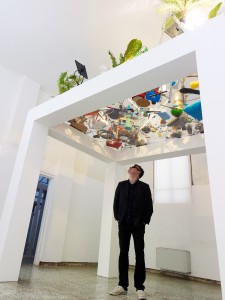 The work of a Liverpool based creator of bespoke scenic sets, stages, props and backdrops is currently featuring in the Venice Biennale.

Visitors are kept in the dark as they stroll around whilst listening to birdsong and other ambient noise to simulate a suburban garden at
night. The view of the observatory is obscured by curtains of theatrical scrim depicting terrazzo – a composite material used to
make kitchen flooring, which was devised in Venice as a way of using up surplus marble chippings. 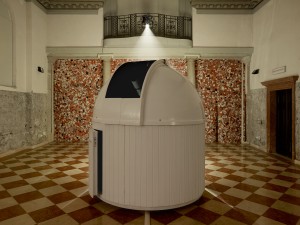 Beyond the observatory, there is a koi carp pond filled with polyurethane terrazzo floating on top. In the next room of the installation, visitors confront a giant coffee table. As they pass underneath the table above they’re greeted with 101 household things – vases, coins, vacuum cleaners representing a kind of solar system.

Speaking of the project, Scenic Workshops Managing Director, Gary Bates, said: “We were thrilled when Bedwyr approached us to develop his installation. When we first received the brief we knew it was going to be a fantastic project to work on, it’s great finally see it completed and on display in Venice.

“One of the big questions was, “How will we get all this to Venice?” Easy, we flat-packed it and reassembled it on-site. We love a challenge!” Said Gary.

The Starry Messenger will be at the Ludoteca Santa Maria Ausiliatrice, Venice, from 1 June to 24 November.

Mike Stubbs to give his Inaugural Professorial Lecture

Liverpool Biennial and FACT in Shortlist for 2016 Lever Prize