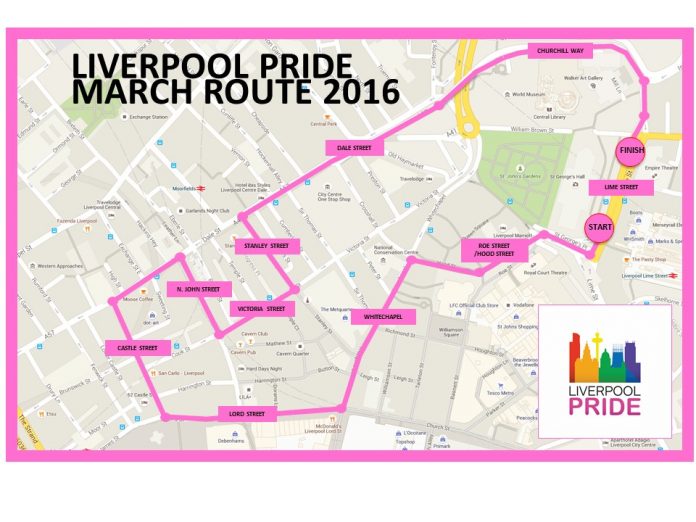 Liverpool Pride 2016: CITY SHOWS ITS TRUE COLOURS FOR THE ALL NEW PRIDE THIS WEEKEND!

Excitement is mounting and the countdown is on as the city prepares to celebrate the all new Liverpool Pride Festival 2016 this weekend.  Already over 25 iconic buildings are showing their true rainbow colours lighting up as part of the Come Out Of The Shadows project against hate crime and in a bid to make Liverpool the most visibly LGBT friendly city in the UK.

The new lively and vibrant March working with Brouhaha to animate like never before, will set off at 12pm on Saturday from St Georges Plateau. It has also been confirmed and a record number of people have subscribed to walk through the city streets, they will pass through Lime Street, Roe Street, Whitechapel, Lord Street, Castle Street, Victoria Street, through a gay quarter on Stanley Street and finally Dale Street and Churchill Way flyover.

The seventh annual celebration of lesbian, gay, bisexual and transgender communities, this year, the Liverpool Pride Festival will take a more prominent position in the city, taking over the St George’s Quarter, including St George’s hall, The Plateau, William Brown Street and St John’s Gardens.  And the free two-day festival on Saturday 30th and Sunday 31st Julypromises to be the most visual and flamboyant Pride ever created! Liverpool Pride would like to thank key sponsors Homes for Everyone, Barclays and Liverpool City Council who have made this year’s event possible.

The theme for Liverpool Pride 2016 is Liverpool icons, chosen to commemorate the multitude of local legends who hail from the Merseyside region – from celebrities and ships to buildings and even our national dish – Scouse! So expect lots of glamorous, ridiculous, ingenuous and, downright fabulous, costumes on show during the weekend.

For the 2016 event, the majestic backdrop of the St George’s Quarter will be transformed into a colourful festival site bursting with activities over the two days.

The main Festival day on Saturday, 30th July will begin with the all-important campaign march which this year will be bigger and bolder than ever. The march will begin at the Plateau Stagein St George’s Quarter at 12pm and ends back at St George’s Hall at 1pm.

There will be three stages offering a full day of entertainment from 1pm to 9pm – with something for everyone whether its great music or classic burlesque that floats your boat. There will also be drag queens, comedy, dance, choirs, swing and all that jazz!

A whole host of celebrities will be introducing the acts including Celebrity Big Brother hunk Austin Armacost, Rikki Beadle-Blair, Pete Price, Leanne Campbell and many more.

Meanwhile, a plethora of fabulous acts will take to the Plateau Stage including The Martini Lounge, The Ruby Slippers drag queens Destiny and Phoenix, Trash Bang Love, Sing Me Merseyside, Emma McGann, Butch Boyz, George Gallagher, Alan Cross and Gerry Potter. For the first time, Liverpool Pride is supported by Awards for All to host a dedicated Find Your Pride Youth Zone. Pride has partnered with GYRO, Brook Wirral and The Action Youth Trans* project to provide a day of support and activities for people under 25.

There will be a programme of workshops and talks as part of the Campaign Day at UNITE’s Jack Jones House between 2pm – 5pm looking at social issues affecting LGBT communities.

Head over to St John’s Gardens between 1-6pm and visit the Find Your Pride Marquee – events include content from GYRO and Action Youth, Wirral Brook’s Working It Out, The What’s Our Pride Story writers and the Garden Stage will host a full music programme throughout the day featuring Splintered Uke, Jack Woodward, Anthony O’Sullivan and Eleanor Nelly.

Throughout the day, the St George’s Quarter will come alive with the sound of music from Batala Mersey – Samba Reggae Drumming Band and the Ukulele Club.

And if all this entertainment makes you thirsty, head to the Champagne Bar for a well-deserved glass of fizz or a cocktail or two at the Plateau Beach Bar. And for a bite to eat, head to the Food Village and sample the wares of the Artisan Food Traders or try some Themed Street Food!

The ‘We Are Family’ day on the Sunday is the latest addition to Liverpool Pride Festival 2016 which aims to create a festival atmosphere for all the family to enjoy.

We Are Family takes place on Sunday 31 July of the Liverpool Pride Festival at St George’s Quarter between 10am and 5pm on St George’s Plateau and in St John’s Gardens and features fun activities, workshops and entertainment throughout the whole day.

The Garden Stage located in St John’s Gardens and will feature performances by Cilla Black tribute, Kate Bell and George Michael tribute performed by Joseph.  The site will also provide a selection of food and drink stalls to suit all tastes and ages.

A key highlight of the day will be Sing With Pride. Singer and Sense of Sound creative director Jennifer John has been commissioned with Arts Council funding to work with six diverse choirs from communities across Liverpool City Region to perform 22 songs covering the theme Liverpool Icons. Performances will include individual choir, mass choral pieces and opportunities for audience participation to sing along and remember some of Liverpool’s best known bands and performers including The Beatles, The Christians, Dead or Alive, The Real Thing, Black, Mel C, and Echo and The Bunnymen.

Wider interactive activities during the day include demonstrations, workshops and performances that invite visitors to try their hand at Samba; belly dance classes; circus skills; and poi. Splintered Ukes is a 30-strong ukulele orchestra; they will perform as well as host workshops to give people a taster session in how to play the instrument.

An Alternative Fashion Show will provide a visual performance on the steps of Liverpool’s iconic St George’s Hall, which provides the stunning backdrop for this year’s Festival. The show will also feature stilt walkers, acrobats and many other surprises – so definitely not to be missed!

The day’s finale will conclude with Jennifer John and all six choirs performing together to deliver a special tribute to Cilla Black, featuring Thomas Lang singing You’re My World by Cilla Black, which marks almost the first anniversary of her death on 1st August 2015.

Funding from the Big Lottery, Arts Council England and the Police Commissioners Fund has enabled Liverpool Pride to work with communities across the region on exciting projects over the last few weeks.

These include the LOOK International Photography Festival at Liverpool ONE; What’s Your Pride Story in partnership with Writing On The Wall, March animation with Brouhaha and the Choir project with Jennifer John.

Come Out Of The Shadows, a campaign to see the city’s iconic venues lit in the Pride rainbow colours has also been launched in a bid to make Liverpool the most visibly LGBT friendly city in the UK. Supported by the Police Commissioner’s Fund as a Hate Crime initiative, public buildings in the city, such as St George’s Hall have been awash with colour to shine a light on diversity.

Liverpool Pride began as a community response to the tragic death of Michael causer in 2009 and exists to remind the community to stand up for LGBT and equality. The Festival serves to host a city wide celebration of LGBT culture where everyone is welcome.

Keep up to date with Liverpool Pride’s new announcements at: