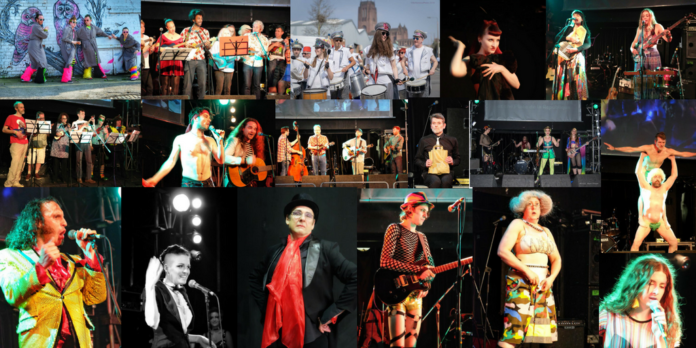 Last Saturday’s free Mad Pride event, organised by Liverpool Mental Health Consortium, has been hailed as the best so far. Over 600 people flocked to District for a day of entertainment, live music, cabaret and burlesque with dozens taking part in activities such as hula-hooping and spinning poi workshops, spilling into the sun-drenched streets.

The celebrations culminated after dark with a lantern-lit parade, accompanied by drumming, attracting yet more participants as it wound its way through the Baltic Triangle. The Mad Pride finale included a thrilling performance with fire dancing and drumming, bringing the day to a magical end.

Performers at the event, reflecting this year’s ‘Circus of the Absurd’ theme, included Freefall Circus, The Secret Circus, and headliners Chanel and the Circus – alongside many more great acts. Mamatung, Loose Moose String Band, Beija Flo, The Strumbrellas and Silver Liners raised the roof with their music, whilst burlesque and cabaret performances from Leebo Luby, Teatro Pomodoro, Jolly Boat, Vendetta Vain, Nana Funk and others entertained the crowd.

Fancy-dress clad attendees also took the opportunity to add their thoughts about their own mental wellbeing to a graffiti wall and these were used by Jodiema to compose a special song for the event, which she performed ahead of the parade and which will contribute to ongoing research.

Feedback from participants was overwhelmingly positive, with 95% of those who responded saying they were very happy with the day.

“I’ve got face-ache from smiling all day!” said one happy punter. Another added, “I’ve never seen anything as good as this to do with mental health.”

Mad Pride is a global mass movement of people with lived experience of mental distress, survivors of mental health services and their allies, that began in Toronto. It seeks to reclaim terms such as ‘mad’ and ‘nutter’ from misuse. It aims to educate but, most of all, it celebrates and stands in solidarity with those who experience distress. Aligning itself firmly with the movement, Mad Pride – Circus of the Absurd provided a platform for people affected by mental distress to mingle and get creative with other musicians, artists and performers.

Sarah Butler-Boycott from Liverpool Mental Health Consortium said, “We’re delighted with the response to this event and proud to be part of a movement celebrating creativity, resilience and survivors’ voices. Thanks to all the performers, volunteers and everyone who came along and enjoyed the party!

“Liverpool Mental Health Consortium’s next creative partnership will be at Africa Oyé in June – at our wellbeing tent, Headspace Hangar, come and say hello!”

James Moores and Lots More in The Times Today