Art in Liverpool, along with rest of the city took to the streets on Friday night to explore this one-night festival of arts and culture. LightNight is now in its fifth year, and this time around the festival was bigger than ever, with over 130 free events open to all.

On Friday 16 May, Liverpool’s cultural venues opened their doors late into the night, with a staggering range of special events and performances. There was something for everyone, from hands-on family activities, spectacular street performances, a psychedelic music collaboration in Liverpool Cathedral, and even the chance to see inside the former Trade Union Centre on Hardman Street which is set to become the central venue for Liverpool Biennial 2014. 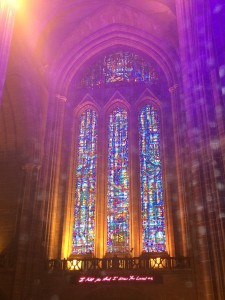 Top of our list was Liverpool Biennial’s “Secret Visit” to their main exhibition space for this year’s festival. Meeting at the Hope St. Suitcases, we were led around the corner to the iconic structure which is set to be refurbished and filled with the work of 17 artists, for the Biennial Exhibition amusingly titled A Needle Walks into a Haystack. This incredible space has had many reincarnations; from the former Liverpool School to the Blind, to its stint as the local Trade Union Centre and the former home of The Picket, this place has some stories to tell and we’ve got our fingers crossed that its new lease of life continues long after the Biennial Exhibition is over.

Ever the struggle to fit everything into one night, we marched on up Hope Street to discover what was happening at Liverpool Cathedral. Filled with music and dance from a variety of performers inspired by cultures the world over, the event was a feast for the eyes and ears. Inside the space, soft lights and projections filled the air with magnificent colours as Jump Start, LIPA and African Rhythms all enjoyed their time centre stage.

‘This is the 5th Liverpool LightNight and it was the biggest and best yet. We were overwhelmed by the response of local people and visitors, who turned out in their thousands and got involved. LightNight gives Liverpool a chance to show off its creative flair and highlights the city’s brilliant cultural offer, which is available to people every day of the year.’

Ahead of the Giant Spectacular’s return to Liverpool this summer to mark the centenary of the outbreak of the First World War, some LightNight demonstrations also chose to commemorate the impact this conflict had on the city. Audiences watched dramatic projections onto two of Liverpool’s most iconic buildings: the Bluecoat, and Liverpool Metropolitan Cathedral, whilst a Sound Battle broke out on the streets between the Kazimier and the Harlequin Dynamite Marching Band who dressed in opposing patterns of the dazzle camouflage we are set to see take centre stage on the waterfront this summer for 14-18 NOW, Liverpool Biennial, Tate Liverpool and Chelsea College of Art and Design’s Dazzle Ship commission.

Art in Liverpool is excited to reveal that plans are already underway for next year’s LightNight on Friday 15 May 2015.