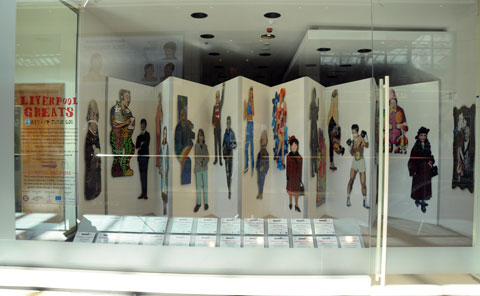 Have a Heart for Art

Art lovers and fans of the famous can now own their very own piece of unique artwork while helping to support the vital work of Alder Hey Children’s Hospital.  The 22 ‘Liverpool Greats’ portraits featured in the Liverpool Discovers  public art event are now available to own and will be on display until 17 June  at Metquarter.

The famous names immortalised by the professional artists include John Lennon, Tom Baker as Dr Who, Jean Alexander as Hilda Ogden, Melanie C, Bill Shankly and Dixie Dean. Each portrait will have a fixed price tag of between £500 and £750.  There will also be a special ‘bonus’ portrait of George Stephenson,  inventor of the revolutionary steam locomotive, ‘The Rocket’.

Proceeds from the sale will go to Liverpool Unites towards their target of raising £500,000 for Alder Hey Children’s Hospital. Buyers can secure their portrait by emailing info@wildinart.co.uk or calling 01298 812189.

The art exhibition and sale is being staged by Wild in Art, whose previous events in the city  – Go Superlambananas and Go Penguins – have already raised £425,000 for local charities. Sally Ann Wilkinson, Director of Wild in Art said: “Liverpool Discovers and our other Wild in Art events have a unique dual role; to bring quality art onto the streets in an easily accessible way and to support the work of important charities – and Alder Hey is no exception, being close to the heart of all Liverpool people we’re delighted to be able to support their invaluable work.”

Liverpool Unites Fundraising Manager Katie Mercer said: “The Liverpool Greats was a fantastic exhibition and these really are one off pieces of art that will look impressive on any wall. We were delighted to be chosen to receive the proceeds of the sale of the Greats as this will help us towards our target to raise vital funds for Alder Hey Children’s hospital.”

Liverpool Discovers came to an end in May after an amazing 12 weeks. The event celebrated Liverpool’s many firsts, greats and lesser-known facts as part of a fun trail of unique art installations and was extended from five weeks to 12 due to popular demand.  The event has been enjoyed by thousands of residents and visitors to the city, while attracting media attention from all over the world including America, China, Australia and Canada.
Liverpool Discovers was commissioned by Culture Liverpool and supported by the European Regional Development Fund. The Metquarter exhibition is staged by Wild in Art and supported by Culture Liverpool, City Central BID, Liverpool Unites and Metquarter.