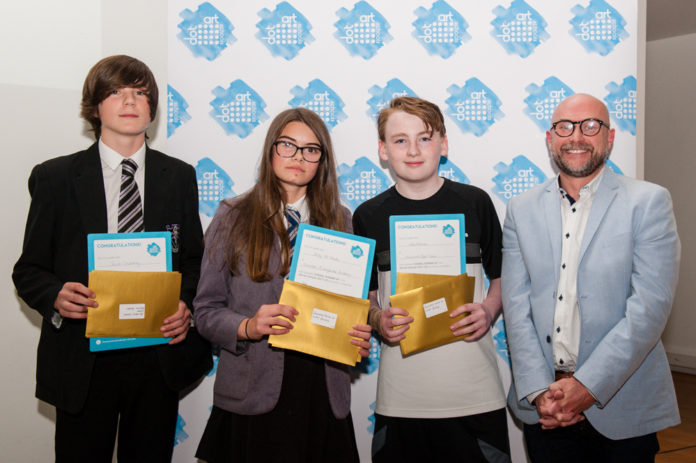 Two budding young artists are celebrating after battling it out with more than 900 pupils from 56 schools across the Liverpool City Region to be named the area’s best young artists.

Jacob Crummey, a Year 9 student from St Margaret’s Academy and Harrison Fair a Year 5 student from Eaves Primary School, were crowned the overall winners of the dot-art Schools competition at a special prize-giving ceremony at LJMU Liverpool School of Art and Design on Thursday 21st June.

Jacob’s winning mixed media piece “Exploding Head 5” and Harrison’s collage piece “The Rainforest Alive 11” both feature alongside the other shortlisted artworks, in the sixth exhibition in the competition’s history. This free exhibition at the John Lennon Art & Design Building opened to the public from 22nd June to 30th June. Following the exhibition at LJMU Liverpool School of Art and Design, prints of the artworks will also be displayed at Merseyrail’s Lime Street Lower Level train station from 1st August – 31st August.

The overall winners and runners-up for both primary and secondary categories were chosen and announced by guest judge Pete Ward (Assistant Headteacher at Childwall Academy) at the prize-giving ceremonies and exhibition launch. Each shortlisted student was also presented with a certificate by the Lord Mayor of Liverpool Cllr. Christine Banks and Deputy Lord Mayor Cllr. Peter Brennan during the ceremony.

dot-art Schools is already a well-established fixture in the academic calendar for many Merseyside schools; since its inception almost 4000 students from over 270 schools have taken part. This is the sixth year it will take place in the Liverpool City Region and due to its success and a new partnership with Liverpool John Moores University, a pilot scheme for Cheshire was also launched last year.