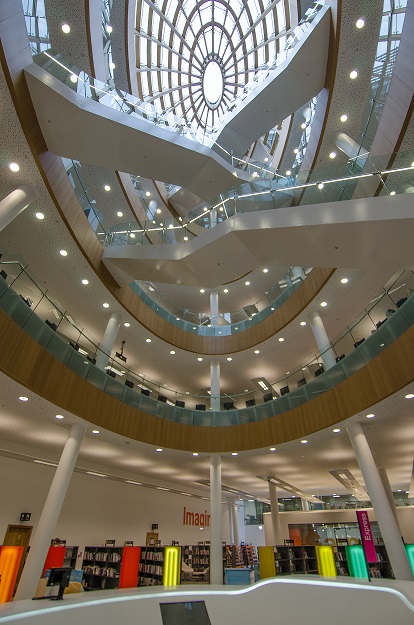 Liverpool Central Library celebrates its fifth Birthday in style with a spectacular itinerary for the LightNight Liverpool Festival.

The Festival sees places, spaces and people across the city come alive to celebrate Liverpool’s world-class cultural offer with one spectacular night of over 100 free performances, exhibitions, installations, workshops, talks and much more.

The evening festival at Liverpool Central Library will include choirs, musicians, theatrical performing arts, writer’s workshops and storytelling groups. A captivating mixture of literary and musical activities will include an exploration of Brazilian carnival through family friendly workshops and outdoor performances.

An official Fifth Birthday party will be held later in the summer to formally mark the occasion. The last few years since Liverpool Central Library reopened in May 2013 after extensive restoration work, there has been almost 4 Million visitors and has consistently been voted in the top ten ‘Top Attractions’ on TripAdvisor and was voted one of the top 10 libraries in the world in a BBC Cultural poll in 2015.

In the last five years, Liverpool Central Library’s top five most popular books have been;

“Libraries are very important to Liverpool and our investment into Liverpool Central Library shows how strongly we believe this. For the past five years Central Library has been one of the top rated tourist attractions in the city with its unique blend of tradition and contemporary architecture.

We are very proud to have welcomed around 4 million visitors to our beautiful library, since it reopened in 2013, and share our culture and heritage with them.”

The Lightnight Liverpool Festival is on Friday 18 May 17:00 – 23:00 for details of events being held at Liverpool Central Library please visit;

New Head of Exhibitions and Displays for Tate Liverpool

Think Inside the Box