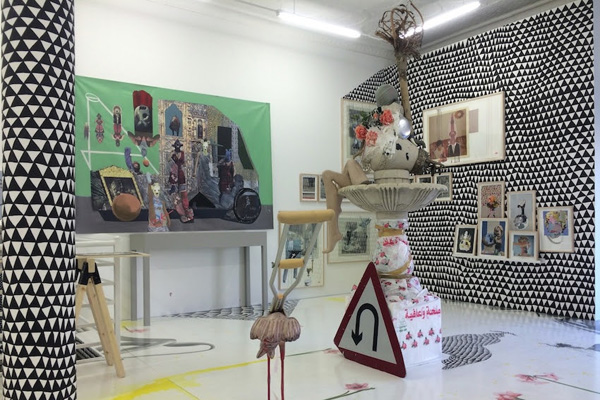 Artists invited to be part of Liverpool Biennial 2016 (9 July – 16 October) are making their first visit to Liverpool. They will be giving a talk at FACT on Thursday 24 September 2015 at 18.30 about their work and discuss episodes, time travel, Ancient Greece, and ‘one day’, with Liverpool Biennial’s curatorial faculty.

This is the fifth in a series of public conversations that exposes and proposes ways of working towards Liverpool Biennial 2016.

Koenraad Deddobbeleer lives in Brussels. In his practice, everyday objects are modified and arranged in larger entities – spaces in which new relations between them emerge. Recent solo exhibitions include There Is No Real Life, Only The Story Of The Life We Are Currently Living, Projecte SD, Barcelona (2015) and A Useless Labour, Apolitical and of Little Moral Significance,C.L.E.A.R.I.N.G., New York (2014).

Samson Kambalu lives in London. His practice looks at received ideas regarding art, history or religion using a variety of media, including video, installation and literature. His Psychogeographical Nyau Cinema combines film with site-specific performances.He is currently featured in Okwui Enwezor’s All the World’s Futures, Venice Biennale 2015.

Jumana Manna lives in Berlin. Weaving together the methods of historian, anthropologist and performer, her films and sculptures question the limits of the body in relation to historic narratives of nationalism. She has an upcoming exhibition at Chisenhale Gallery, London (2015), and recent shows include Beirut Art Center (2015); and Sculpture Center, New York (2014).

Ramin Haerizadeh, Rokni Haerizadeh and Hesam Rahmanian have lived and worked together in Dubai since 2009. Their projects are often conceived as collaborative exhibitions.They incorporate assemblages, artworks and unique objects, inviting artists and non-artists to be contributors. Recent shows include Callicoon Fine Arts, New York; the 8th Asia-Pacific Triennial of Contemporary Art, Brisbane; and the Institute of Contemporary Art (ICA), Boston (2015).

Lucy Beech lives in London. Her video and performance works explore the relationship of individual to the group, often performing the documentary as fiction through choreography and disrupted narrative structures. Forthcoming and recent presentations of her work include Frieze Live, Frieze, London; James Fuentes, New York; Tate Britain, London (with Edward Thomasson); Tetley, Leeds; and The Harris Museum, Preston (all 2015).