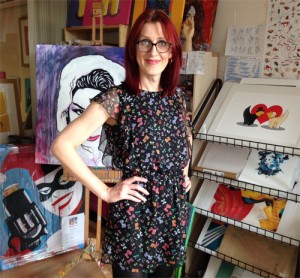 The Independent on Sunday’s Pink List is a list of the 101 most influential Lesbian, Gay, Bisexual and Transgender people in the UK. This year’s list was chosen from more than 1,300 nominations.

Sophie Green moved to Liverpool during the 2008 capital of culture year and has since established herself as a successful artist, working in a variety of mediums. Sophie is the only visual artist to be named in the list and is one of 25 transgender nominees to have been shortlisted.

Sophie said ‘I’m absolutely thrilled to be nominated for the Pink List and am very humbled to have been named ‘one to watch’. There are some incredible people on the list this year, many of whom I admire greatly. 2013 has been the year of equal marriage, it’s also been a year when transgender people finally began to glimpse the sort of respect and equality that gay people can expect. To see the transgender community represented in greater numbers each year shows society’s attitudes are changing. It’s incredibly empowering to be a tiny part of that.’

Since moving to Liverpool Sophie has been involved  in many exhibitions and has produced artwork for high profile clients including Alder Hey Children’s Hospital and the London 2012 Olympics.

Find out more about Sophie at www.sophie-green.com