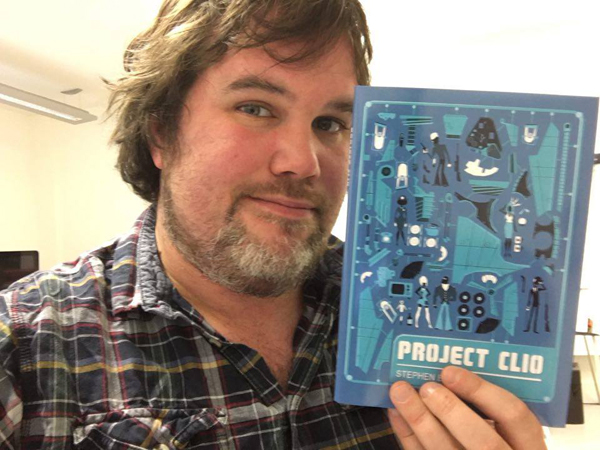 In his most exciting project to date, artist and animator Ilan Sheady can reveal that he is the illustrator for highly-acclaimed sci-fi writer Stephen Baxter’s latest work, a novella called “Project Clio” released by PS Publishing.

Liverpool-based artist Ilan has made a name for himself for his illustration and animation work, especially in the horror genre, culminating in a vast portfolio including branding for Liverpool Youtube channel TorAthena, an album cover for Run Out the Guns and even a music video for international artist Chanel Samson.

Ilan cites Baxter as one of his inspirations from the world of sci-fi and is enjoying his forays into the world of literature:
“I actually approached PS Publishing back in 2014. I admired their catalogue of books and also that they represented author Ramsey Campbell as well as some other huge horror names. After sending over a body of work they replied within a couple of days complimenting me on the work and that they would keep my details on file.

I was really excited but it wasn’t until January 2016 that I got the request to do Stephen Baxter’s cover. The best part of it was when I read the email I was having coffee with my dad who’s Stephen Baxter’s biggest fan, so when I told him he was particularly impressed.”

The cover, in a dazzling blue, displays a collage of characters from the story alongside everyday objects and less recognisable elements that will become known to readers throughout the book. Ilan explains that the miscellaneous pieces are designed to be parts of a puzzle and can be scanned into image editing software to be rearranged, or if you prefer a more low-fi option, you can even cut up the dustcover and manually construct an object that relating to a key theme within the story.

Ilan credits Phil “Nuever” Newman, one of his Road Studios counterparts, for his technical expertise with the execution of the complex design of the interactive elements, an idea that has been well-received by Baxter himself:
“I didn’t get to work with Stephen Baxter personally. It was all done through PS Publishing but he had to approve the illustration design which I first sketched up. At the time it was very different from what was requested but after reading the story I felt this was a perfect interpretation and worth the gamble. He loved the concept so I’m glad I took the chance.
Since the launch of “Project Clio”, Ilan has been approached to work on other album covers, a comic book and an animation, so it looks as if we will be seeing plenty more of Ilan in the near future!”

“Project Clio” is available to purchase, with a first edition print run of just 1000 copies, a small number of which are signed by Stephen Baxter himself, get yours here: http://www.pspublishing.co.uk/project-clio-jhc-by-stephen-baxter-3856-p.asp