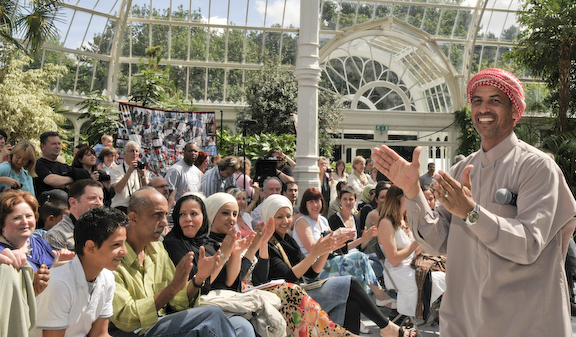 The ever-popular Liverpool Arab Arts Festival (LAAF) returns to the city for a 13th consecutive year from 7 – 15 June 2014.

Boasting a huge range of events, the 9 day long festival will take place at various high profile venues across the city including The Bluecoat, FACT, Unity Theatre, St George’s Hall and Sefton Park Palm House. This year LAAF will coincide with Liverpool’s International Festival for Business.

This eclectic festival will cover a plethora of cultural mediums and genres, with family activities, visual arts, film, performance, music, dance, food, a book launch and interactive workshops. People of all ages and cultures will find something to interest them.

The full programme, which includes high profile artists from all corners of the Arab world and some UK premieres, will be announced in the coming weeks.

Taher Qassim MBE, Chair of Liverpool Arab Arts Festival said: “LAAF reaches its thirteenth year of bringing the finest Arab arts to the city of Liverpool. The festival is committed to put the audience at the heart of what we do. We put our audience feedback into action through our regular marketing research and our team’s rigorous debate, discussion, and planning. I think this helps to make LAAF the dynamic, interactive, and forward thinking festival it has grown into. The festival is rooted locally in Liverpool but has reached a global reputation where many aspire to create something similar or be part of the festival from an international reach.”

Eckhard Thiemann, Artistic Adviser at Liverpool Arab Arts Festival said: “Each June Liverpool Arab Arts Festival is an important magnet for audiences to experience the work of Arab artists in the city.  By hosting major stars as well as young and emerging voices, LAAF 2014 will offer a dense programme which skilfully presents the celebratory alongside the thought-provoking.”

The IFB will see delegates travelling to the city from far and wide, including a group from the Arab British Chamber of Commerce and a large delegation from Qatar so LAAF organisers are hoping that this year’s festival will attract an audience from an even more diverse range of countries than in the past.

Virgin Trains is the Latest 08 Partner

Quay Brothers’ Films to be Screened at Victoria Gallery & Museum