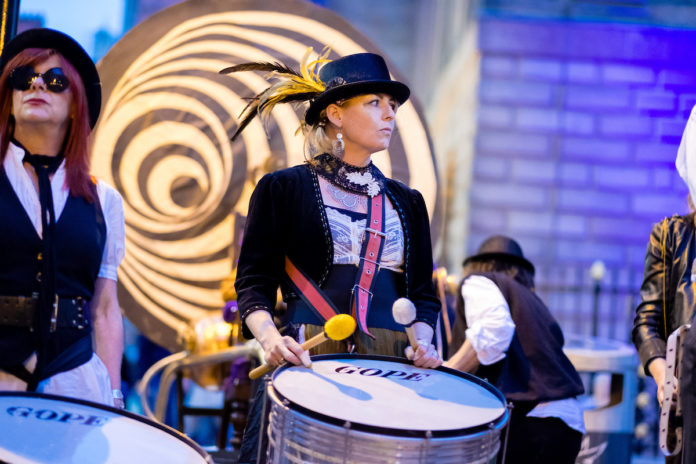 A night of transformation

LightNight Liverpool, the city’s one-night arts festival, is back on Friday 18 May 2018. With seven new commissions from artists alongside 100+ free events at venues and unusual spaces across the city, the annual “culture crawl” celebrates arts and culture, ten years on from Liverpool’s title of 2008 European Capital of Culture.

For 2018 the festival theme is Transformation. Understood as a significant change in both people and place, transformation is happening all around us; visible and invisible, turbulent and political, personal and emotional.

Produced by social enterprise Open Culture – who are also behind Tickle the Ivories and the Winter and Summer Arts Markets – LightNight Liverpool is in its ninth year. It showcases the creative lifeblood of Liverpool, presenting new and ambitious commissions alongside free events including everything from concerts, exhibitions, hands-on workshops and dance to street performance, theatre and talks.

Venues large and small will open their doors until late in every corner of the city; from Albert Dock and the Waterfront to St George’s Quarter, Ropewalks, the Baltic Triangle and Hope Street. Attracting visitors of all ages, the city comes alive for the night; in 2017, over 15,000 people attended LightNight events.

Liverpool AV artist In Atoms will create an exclusive new installation presented as a two-screen dialogue with an original musical score at Liverpool Cathedral.

In Patrick Dineen’s The Polar Bear Waltz the last polar bear sings an aria of the beautiful Arctic land he once knew that has been utterly transformed by climate change. The performance will take place at LJMU’s John Lennon Building.

Double D Divas introduces you to Dolly Twinkle (Elaine Collins) and Dora Bella (Karl Lorca), the most exciting double act since Velma and Veronica (deceased) Kelly. Both are fighting to find their place in a world that takes no account of their singular talents or their particular disabilities. Expect singing, heartbreak, drag, slippers, and British Sign Language.

Singing Mirror will take place at the British Music Experience, where audiences will find themselves transformed in a series of projected kaleidoscopic patterns.  Live video is fed through several animated lenses to create an ever-changing environment. Alex Mead and Jack Wates create a kaleidoscopic light and sound installation controlled by audiences who can interact with projected ‘mirrors’.

Elinor Randle and Tmesis Theatre present Grandma was a Monkey, a highly visual and physical spectacle in the Albert Dock telling the story of human evolution and transformation.

Jayson Haebich explores the transformation of light with an installation that takes the white homogenous light from a laser and passes it through a special lens to break it into millions of component colours.

Stanza by John Elcock is a site-specific light installation that transforms a device familiar to us in our daily encounters with the modern world, into something altogether more enigmatic and less purposeful. Fragments of his published poetry will form the basis of the piece, in which a city street will become a space for reflection and illumination.

The full programme will be released 1 May and is available to pre-order now at www.lightnightliverpool.co.uk

Liverpool 2018 – Ten Years in the Making

Mary Fitz residency in Ramallah city in the West Bank

Work begins to transform Calderstones Mansion into The International Centre for...