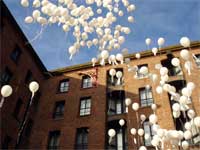 I got caught up in a bit of a media circus yesterday. Went to Mathew St. at 11.00 to see people commemorating 25 years since John Lennon was killed. There was a big crowd there from all the major TV channels and newspaper reporters, there was even a handful of fans. After a few speeches we all trooped down to the Albert Dock. A bigger crowd here as hundreds of white balloons with messages to John were released at noon.
I was just there to watch but I declined several requests from reporters looking for interesting quotes from fans. Releasing balloons is always fun but I find the rest all very silly and I’m a bit pissed off that there wasn’t a single word in any of the media, even locally, when it was the anniversary of George Harrison’s death just last week.

Vote for the VG&M to bring Polly Morgan to Liverpool