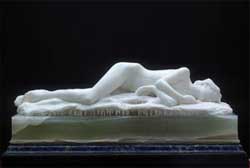 About the artwork
‘Snowdrift’ was Ford’s last work. Shortly after his death, aged 49, in late December 1901, his friend and obituarist, Frank Rinder, entered his studio and saw the almost finished clay model, still soft and with the hand marks of the sculptor still visible:

“What more aptly than this Snow Drift could symbolise those ‘thoughts hardly to be packed into a narrow act’, the ‘all I could never be’, of a life which closed before the fiftieth milestone had been reached? It is a figure born of snow flakes – snow flakes which thus congregated retain much of that intangibility, that airy grace, that happy abandon which they possess as in myriads they pass, wind-driven, before our eyes. An inscrutable fate has cast this personification of snow drift – numbed, but surely with breath still issuing from the parted lips – upon some lone shore.”

Council’s 2017 culture programme attracted over one million visitors to the...