‘The Scapegoat’, by William Holman Hunt 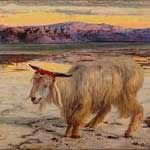 In 1854 William Holman Hunt completed ‘The Light of the World’, which along with ‘The Scapegoat’ remains one of the best known religious images of the 19th century. His continuing interest in religious subjects for his paintings and a determination to paint directly from Nature culminated in his first trip to the Holy Land in 1854-6. Here he could pursue his desire to paint religious narratives in the landscape in which they took place.

He travelled to Jerusalem in June 1854 and then on to Oosdoom, on the southern shore of the Dead Sea, in October of that year. Here he started a smaller study for the Lady Lever painting, which is now in Manchester City Art Gallery. Before a second trip to the area in the November, he bought a rare, white goat in Jerusalem then spent about ten days working on the Lady Lever canvas at Oosdoom, painting the distant mountains and lake and making sketches of the goat. The goat proved a somewhat fidgety subject, refusing to stand still or hold a pose. When poor weather forced Hunt to return to Jerusalem for the winter, the goat died on the journey home.

No Place for Poetic Humour in Parliament

The Big Draw 2008 in Liverpool

Maria Balshaw appointed as Tate Director, but what does that mean...