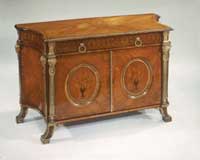 ‘AN ADAM COMMODE, designed in the French taste, with drawer in the frieze and folding doors below enclosing drawers, inlaid with vases of flowers, rosettes and link ornament in marquetry on satin-wood ground, with tulip-wood borders, mounted with ormolu corners chased with rams’ heads holding laurel-wreaths, and bands of scale pattern – 4 ft. 10 in. wide.
Formerly the property of the Rev. Thomas Cooke, of Brighton, to whom it was presented by the Duke of Wellington.’

The Rev. Cooke was the Iron Duke’s campaign chaplain. It is thought that the commode – one of a pair from His Lordship’s London residence Apsley House – was given to the clergyman when he became Perpetual Curate of St. Peter’s Church, Brighton in 1828. Sold locally after Cooke’s death, the piece came into the possession of Leonard Clow of Hove, from whose collection it was sold by Christie’s to a Mr Partridge for £693. Within a month Partridge had sold it, at a healthy profit, to William Hesketh Lever, for £900.

E-Cards from the Tate