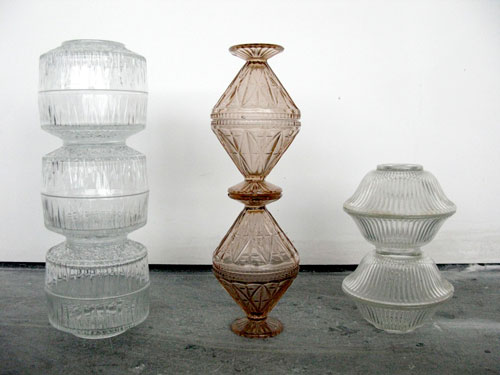 Artist, Kevin Hunt, based at Liverpool’s Royal Standard studios has just had a solo show in Brussels.

Hunt constructs sculpture utilising the redundant; particularly furniture  which is reconfigured into linear and  increasingly minimal works that  often balance or are propped precariously. Placed in fragile  equilibrium, these  structures are repeatedly undermined further through  transformative processes such as burning or soaking, resulting in darkly monolithic and vulnerable objects, mutably teetering on the edges of  two and three dimensions. Through irreversibly altering these things whilst simultaneously raising their status, the work attempts to question what it is to be an object in the world and how these objects come to exist as sculpture.

Often the result of a series of experiments eliciting chemical and physical  changes, the resultant ‘tableau’ of sculpture exposes an inherent geometric beauty that has always lay within the objects used, playfully  tampering with the poetics of the found form.

This Solo Show presentation at Art Brussels will be Hunt’s first commercial presentation.

Kevin Hunt was born in Liverpool, United Kingdom in 1983, graduating from the North Wales School of Art and Design in 2005. He currently lives and works in Liverpool.

Recent exhibitions include No Noise at The Agency, London (2011), Built Overnight, curated by Rhubaba during The Annuale festival in Edinburgh (2010), Global Studio at The Bluecoat, Liverpool (2010), NO SOUL FOR SALE at Tate Modern, London (2010) and Hong Kong ArtWalk within the public realm of Hong Kong (2010).

Kevin also participated in Rendez-Vous 09, at the Institut d’art Contemporain, during the 10th Biennale de Lyon in 2009, and more recently curated DEADPAN at The Royal Standard during The Liverpool Biennial, 2010.

The Art of Networking – Every Wednesday at Artfinder