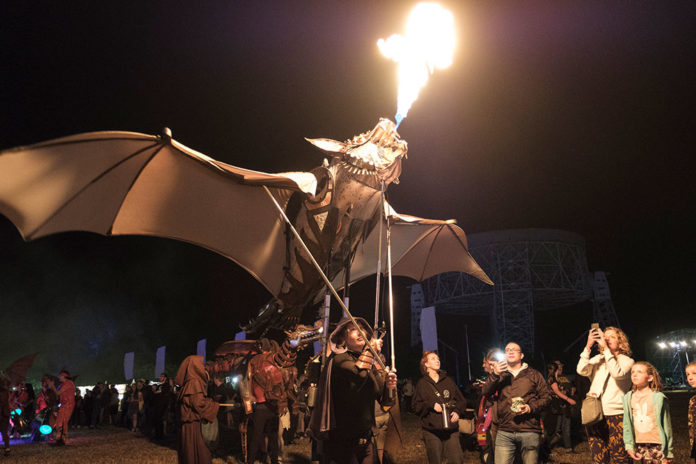 KATUMBA’S ANNUAL HALLOWEEN PARADE RETURNS TO LIVERPOOL CITY CENTRE WITH THE THEME FROM DARKNESS TO LIGHT: WHERE THE WORLDS MEET ON SATURDAY 26TH OCTOBER, 2019.

Katumba, the largest drum ensemble in the North West, is preparing to bewitch the public’s senses with an all-immersive spectacle, a hybrid of visual performance, theatre & music this Halloween.

Having secured funding from Arts Council England for the first time for this unique event, Katumba has promised the parade to be the biggest to date, with more artists contributing and more musicians taking part than ever before.

This year’s theme – From Darkness to Light: Where the Worlds Meet – has taken artistic steer from ancient traditions such as Gaelic Samhain, Indian Diwali and Brazilian Dia de Finados. The parade will create a truly magical environment resplendent with astounding puppetry, dazzling light effects and tribal drumming.

Juliana Landim, Katumba’s Artistic Director, says: ”With this being our 5th year organising our Halloween Parade, we wanted to make it extra special with more and bigger activities: we’ll transform Liverpool City Centre into a playground of imagination, inspiring and engaging audiences through a big visual interactive unexpected spectacle!

Reflecting the uncertainty felt by many about the times we live in, we’ll explore the theme of where ‘the different worlds meet’: the threshold between darkness and light, good and evil and how these have been present in so many ancient cultures across the world, including the Celtic Halloween tradition of Samhain, Diwali Indian Festival of Light, Brazilian Orixa Dia de Todos os Santos and so on.”

The parade starts at 8pm at the corner of Bold St. and Colquitt St. in front of Soul Café. Winding its way through the city centre, the route will take in tourist haunts and less well-trodden streets alike. For excellent vistas, watch the parade at Liverpool ONE, which provides great vantage points.

For the first time, Katumba is inviting audiences to take part in this dazzling spectacle! Workshops at the Katumba Culture Hub in Toxteth will offer lantern-making, circus skills, acrobatics, and more on the two weekends preceding the event.

And on 31st October, Katumba will bring ‘From Darkness to Light: Where the Worlds Meet’ to the Katumba Culture Hub at John Archer Hall for an evening of Halloween fun with workshops, games performances, food & more.

Anna Rothery, former Princes Ward Councillor and current Lord Mayor, said of Katumba’s planned activities in Toxteth: ‘This is such a welcome addition to the area, especially around mischief night. I’m looking forward to (…) the long term impact these activities will have on our local and city wide community.’

More on those Pink Bunny artists