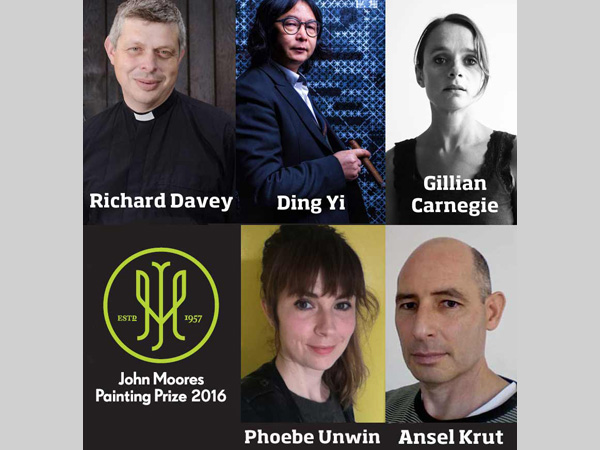 The Walker Art Gallery has announced the names of the five jury members set to judge the John Moores Painting Prize 2016.

The announcement comes with two weeks remaining for artists to enter the competition, which closes for entries on 9 November 2015.

The jury members, who represent an international cross-section of influential voices from the art world, will consider thousands of entries as part of the judging process, before selecting the final shortlist and the overall winner of the £25,000 prize.

A selection of shortlisted works will be displayed in the renowned John Moores Painting Prize exhibition, held at the Walker Art Gallery biennially. The 2016 exhibition runs from 9 July to 27 November 2016.

The jury members for the John Moores Painting Prize 2016 are:

Gillian Carnegie – (b.1971) British artist Gillian Carnegie was born in Suffolk and studied at Camberwell School of Art and the Royal College of Art, London. Shortlisted for the Turner Prize in 2005, her work has been presented at numerous solo exhibitions in London, New York and Cologne. Carnegie’s paintings have also featured extensively in group exhibitions held across Europe and the USA.

Rev’d Dr Richard Henry Davey – (b.1966) Born in Eastbourne, Richard Davey is an internationally published author and freelance curator. A member of the International Association of Art Critics, he has written and contributed towards numerous titles commissioned by the Royal Academy of Arts, including the exhibition catalogue for its Anselm Kiefer show in 2014 and the 2015 summer exhibition catalogue. Davey was ordained as a priest in 1994 and holds the position of Co-ordinating Chaplain at Nottingham Trent University.

Ansel Krut – (b.1959) Born in Cape Town, South Africa, Ansel Krut studied at the University of the Witwatersrand, Johannesburg and the Royal College of Art, London. He was awarded the Abbey Major Scholarship in Painting to attend the British School at Rome in 1986/7. Recent solo exhibitions of Krut’s paintings have been held at Jerwood Gallery, East Sussex; Stuart Shave/Modern Art, London; Marlborough Chelsea, New York and KAdE Kunsthal, The Netherlands.

Phoebe Unwin – (b.1979) Phoebe Unwin was born in Cambridge and lives and works in London. She studied at Newcastle University and Slade School of Fine Art. In 2011 she won a Philip Leverhulme Prize. She has been shortlisted for the Max Mara Art Prize for Women: 6th Edition (2015-17) in association with the Whitechapel Gallery, London. Her work is in major collections across the UK and Europe and has featured in numerous exhibitions, including Distant People and Self-Soothing Objects; a new solo show at Wilkinson Gallery, London.

Ding Yi – (b.1962) Ding Yi was born and currently resides in Shanghai. He studied at Shanghai Arts & Crafts Institute and Shanghai University. His practice encompasses painting, sculpture, spatial installation and architecture. Ding Yi has exhibited extensively at various institutions and galleries across Asia, Europe and the USA. Since 2005, he has held the position of Vice Dean of the fine art department at Shanghai Institute of Visual Art.

The entries will be judged anonymously and the judges will select a final shortlist of five paintings from which the £25,000 first prize winning work will be chosen and four additional prizes of £2,500 will be awarded.

Visitors to the John Moores Painting Prize exhibition will also be invited to vote for their favourite painting to win the popular Visitors’ Choice Award. The winning artist will receive £2,016.

Established in 1957, the internationally-renowned prize, organised in partnership with the John Moores Liverpool Exhibition Trust, has championed contemporary British painting for almost 60 years; more than two decades longer than any other art prize of its scale.

Past winners include David Hockney (1967), Mary Martin (1969), Peter Doig (1993) and Keith Coventry (2010). Sir Peter Blake, winner of the junior prize in 1961, is Patron of the prize. The winner of the prestigious first prize in 2014 was Rose Wylie with her striking work, PV Windows and Floorboards.

The John Moores Painting Prize is organised in partnership with the John Moores Liverpool Exhibition Trust and is supported by its exhibition partner Weightmans. The exhibition is presented during Liverpool Biennial 2016, a festival of newly commissioned contemporary art from around the world. It takes place from 9 July until 16 October across the city in public spaces, galleries and online.

Royal Standard Sale – now many at Half Price!