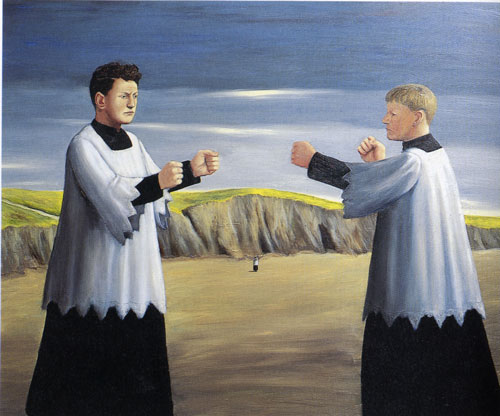 From 13 January until 15 April 2012 the Walker Art Gallery will host the first retrospective of work by the Liverpool born artist, John Kirby.

The Living and the Dead: Paintings and sculpture by John Kirby explores the themes of gender, religion, sexuality and race and Kirby’s complex relationship with each of them. 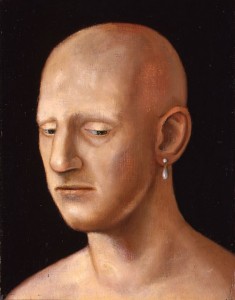 Comprising of over 50 paintings and 10 sculptures The Living and the Dead: Paintings and sculpture by John Kirby brings together a group of work spanning over three decades, from early paintings made at the Royal College of Art in the 1980s to more recent works.

Highlights in the exhibition include Lost Boys (1991), an image of fighting altar boys that references Kirby’s Catholic upbringing and is one of the artist’s favourite paintings and White Wedding, (2006), depicting a civil partnership. The sculptures in the exhibition are a more recent development in his artistic practice but also a continuation of it, with his ceramic sculptures of heads and figures bearing a striking similarity to the figures found in his paintings.
Solitary figures in strange worlds dominate Kirby’s work; this has led many people to compare his work to that of Réne Magritte. However Kirby cites the Polish-French Modern artist Balthus and American realist painter Edward Hopper as his major influences. The claustrophobic interiors charged with an uncomfortable eroticism seen in Balthus’ paintings, and statements about the human condition in Hopper’s, are themes that also underpin Kirby’s work.

Originally from Tuebrook, Liverpool, John Kirby was born in 1949 into a deeply religious Catholic family. He left school at the age of 16 and worked as a shipping clerk in Liverpool. He then travelled to Calcutta to work with Mother Teresa in a children’s home. It was only in the 1980s that he began to pursue an artistic career, studying at St Martins School of Art and the Royal College of Art in London.

He has exhibited extensively throughout Europe and the USA and his work is held in both private and public collections including that of artist David Hockey. The latter, Forever Clinging, is on loan to the exhibition and was inspired by Hockney’s own work, We Two Boys Together Clinging (1961).

John Kirby says, “To be asked to show my work at the Walker Art Gallery is a great honour, a home-coming I couldn’t have imagined even in my wildest dreams. As a child during the 1960s a favourite destination of mine was the Walker. My favourite paintings were Samson by Solomon J. Solomon and The Triumph of the Innocents by William Holman Hunt. It was in the Walker that I first encountered the naked body and felt bewildered stirrings. The heady combination of art, sex and religion was an intoxicating mix in those otherwise innocent times and something that heavily informed my work in later years.”

Exhibition curator and head of fine art at the Walker Art Gallery, Ann Bukantas says, “Not only is John from Liverpool with a great fondness for the Walker Art Gallery, but he is also an extraordinary artist. For many years we have been keen to work with him, not least because of his international reputation, so we’re thrilled to be displaying his paintings and sculpture at the Walker and to be able to introduce his work to our visitors.“

For more information about The Living and the Dead: Paintings and sculpture by John Kirby and the Walker Art Gallery go to www.liverpoolmuseums.org.uk/johnkirby.