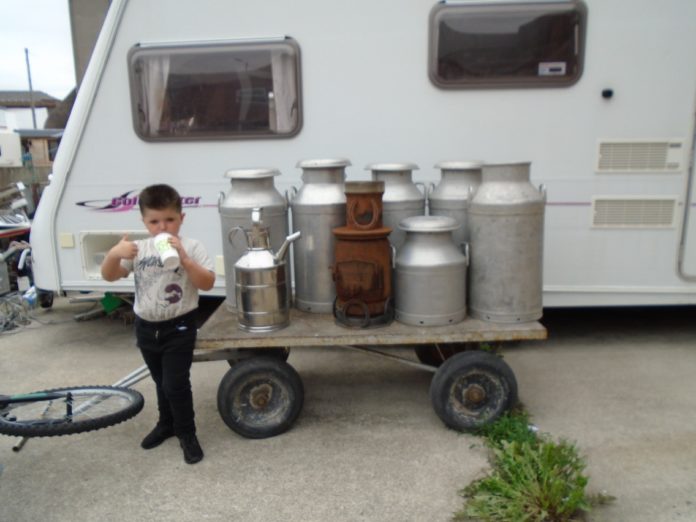 A new exhibition, curated by American artist Jona Frank, provides a rarely seen glimpse into the lives of women in Liverpool’s Irish Traveller communities today as well as snapshot of Irish Traveller culture from 25 years ago. The photographs, taken by Irish Traveller women and their children, provide an insight into a community – often on the receiving end of many assumptions and outside perspectives – showing a life of family and domesticity, captured during summer 2018.

Shown in two locations, It’s the Travelling Life, is a collaboration with members of Liverpool’s Irish Traveller Community, Liverpool Irish Festival, Liverpool Mental Health Consortium and Irish Community Care. The relationship with the Irish Traveller community has developed from Irish Community Care’s ongoing work over the past two decades, developing a strong relationship and understanding of the community.

The inspiration for the project was Jona Frank’s 1990s images of Irish Travellers in Tallaght, near Dublin. As that work turns 25, there was a desire to empower, instead of viewing them through a media lens or third party. Here, the community’s women document and tell their stories themselves. They chose to capture images of their day to day lives. Typically, focus is given to the lives of the men within Irish Traveller communities. Women -their domestic roles, family care, community rituals and routines- are not often given the same centre stage. Here, the images they have given us show the importance of family. Providing a sense of ordinariness they also hint at some of the darker aspects within the community, most notably the issues of mental health problems and suicide among young men and of the preoccupations and concerns of a marginalised community. A selection of works from Jona Frank’s 25 year old project will be shown alongside the 2018 pieces.

Jona Frank has curated the women’s photographs to best reflect the stories told by them. On seeing the photographs, she recognised the women had surpassed the brief to ‘tell a story that is important to you’ and were looking closely at their world. She said: “Setting out to do that may sound simple at first, but actually doing it is far from simple. Actually doing it requires a person to stop during their day-to-day tasks and think about what their story is, what their purpose is. It is celebrating the ordinary. It is celebrating a history and a course of life that others seem to quickly dismiss and disrespect. These women and children are taking a step back from being in their day-to-day to observe it, to look closely, to create a record and to share it with pride. That’s courage”.

As part of Liverpool Irish Festival, the project provides a platform for another strand of ‘Irishness’. Director Emma Smith says it is central to the ambition of the Festival to provide Liverpool Irish people with their own means to define their culture and voice. “Jona Frank is one of those empathic artists who has an ability to illuminate her subject’s heart and humanity. With this project we wanted to work with Jona to use her ability and capability to support community expression. The Liverpool Irish Traveller community is marginalised –generally and within the identity of Liverpool Irishness – so it important for us to recognise their unique vantage, provide space for their voices and support the artistic expression that came directly from them”.

For Irish Community Care, the project is part of their ongoing work with Liverpool’s Irish Traveller community. “We’ve built up a trust relationship with the families for over 20 years. We have worked with them, empowered them and listened to them to develop a greater understanding of how we can support them and in raising awareness of how important they are as a society. Women are the backbone of this community and provide a real strength within it but often don’t get a voice”.

Liverpool Mental Health Consortium, who organise the annual Liverpool Mental Health Festival, is committed to co-designing creative engagement around community wellbeing with members of diverse communities. Part of their remit is also to involve communities in researching the causes and effects of distress, and in implementing recommendations arising from the research. Development and Opportunities Lead, Claire Stevens, said: “We’re delighted to be supporting Irish Traveller women to share their stories with a wider public, to promote cross-cultural understanding, practical learning and creative, participatory opportunities. Thanks to all our partners on their project and, most of all, the women and families, who gave their time and energy to the project”.

It’s the Travelling Life will be exhibited at two venues in Liverpool.

At George Henry Lee’s the exhibition will open  from 18 Oct- 28th 2018 as part of Liverpool Irish Festival.

It will also be exhibited as part of the city-wide Liverpool Mental Health Festival ‘The Art of Falling Apart’ exhibition, taking place at The Brink from 11 October – 7 January 2019. The full Festival programme is at http://www.liverpoolmentalhealth.org/liverpool-mental-health-festival/

The project is supported directly by each organisation and with specific funding from The Wellcome Trust, Arts Council England and Liverpool City Council.

Celebrate heritage, creators and community with The Reader and Independent Liverpool