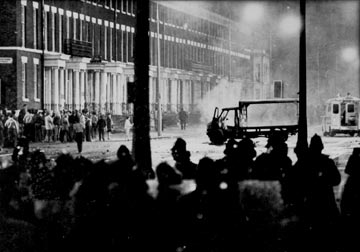 Toxteth is an inner-city neighbourhood of Liverpool, also known as Liverpool 8. Social and economic factors such as poor housing, high unemployment and a general mistrust of the Merseyside Police preceded the troubles. The police were frequently accused of discriminatory and racist attitudes towards the Black community, such as the misuse of the ‘sus’ laws (which allowed police to stop and search anyone deemed suspicious).

The resultant disturbances of July 1981, primarily involving Black and white youths against the police, placed national attention on Toxteth and its community members.

The Scarman Report (1981) acknowledged the “racial disadvantage that is a fact of British life” and concluded that “complex political, social and economic factors” created a “disposition towards violent protest”.

The spark which lit the fuse was the stopping, searching and arrest of a young Black male on suspicion of taking a motorbike without consent (it was later established that he had permission). On being put in a police van a group of youths came to his assistance and released him.

Several days of disturbances ensued, including street battles, police baton charges, looting and the first use of CS gas by the police for crowd control on the British mainland. A tense atmosphere followed in the prevailing months which saw further conflicts between local youths and police.

The exhibition is a collaboration with the Merseyside Black History Month Group (MBHMG) and Writing on the Wall (WoW).

A Rita Riot on Hope Street for Sgt Pepper