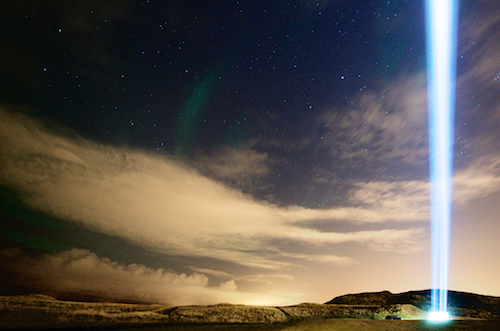 The peace tower is looking rather good at the moment, its lit up this week for the Spring equinox and anniversary of  John and Yoko’s Honeymoon.

IMAGINE PEACE TOWER is an outdoor work of art conceived by Yoko Ono in memory of John Lennon.
It is situated on Viðey Island in Reykjavík, Iceland [map], powered entirely by Geothermal Energy.

The artwork was dedicated to John by Yoko at its unveiling on 9 Oct 2007, Lennon’s 67th birthday.
IMAGINE PEACE TOWER symbolizes Lennon’s and Ono’s continuing campaign for World Peace,
which began in the 1960s, was sealed by their marriage in 1969 and will continue forever.

IMAGINE PEACE TOWER is currently only illuminated on the following dates: