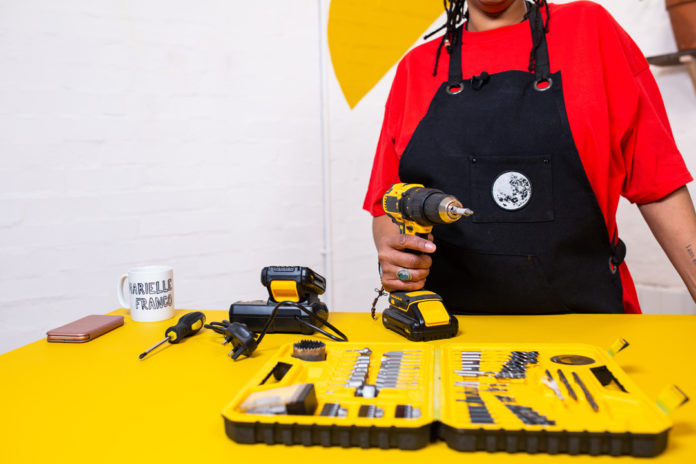 Award-winning arts and social justice organisation IDLE WOMEN are launching POWER TOOLS, a series of 14 DIY videos made by and for women on 24 July 2019.

IDLE WOMEN’s fun, accessible videos star fourteen inspiring women and girls, some as young as 7 years old, who give instructions on basic DIY tasks such as changing a light bulb, smashing a window, painting a wall, and using a drill; as well as longer more in-depth tutorials giving guidance on jobs like putting up a shelf and bricklaying.

Co-caretakers of IDLE WOMEN, Rachel Anderson and Cis O’Boyle said, “What we want to communicate above all else is that women can ‘have a go’. We don’t have to be professionals to put up a curtain rail and if we make a mess of it, there is always Polyfilla. We want women to find themselves in these videos, working it out as they go along, and sharing concerns or hesitations as part of a learning process that encourages others.” POWER TOOLS is part of HELEN, a three-year programme of DIY-led art projects by women for women, based in St Helens on Merseyside. HELEN grew from the desire to dismantle a house and build a home, and also established the IDLE WOMEN INSTITUTE, a temporary dedicated space, which was stripped back, and renovated throughout the project.

Since their inception in 2015, IDLE WOMEN have worked to create spaces where all women can belong, through a process of workshops and partnerships with women who face the most complex barriers; living in refuges or seeking specialist support following domestic violence or other harmful traditional practices. IDLE WOMEN have created permanent safe spaces, on the Selina Cooper, a narrow boat they designed and built to provide workshops and a social space for women; and in the Physic Garden, the UK’s first medicinal herb garden dedicated to women and girls, which won IDLE WOMEN a £50,000 award from the 2019 National Lottery Fund’s The People’s Project.

Help Build a Giant for Liverpool

Its Time to Apply for Culture Company Grants