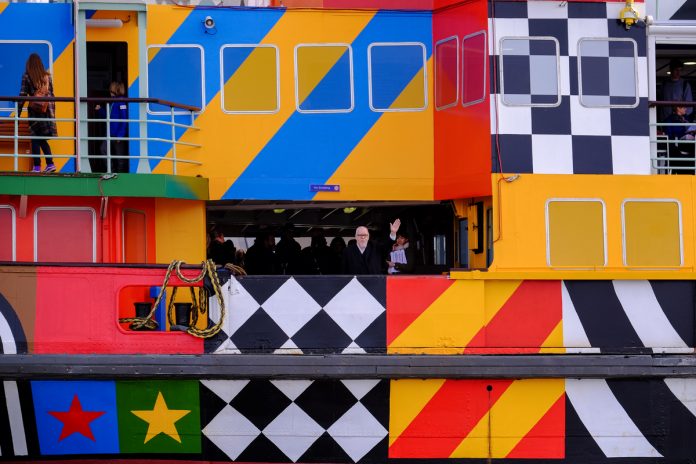 Iconic pop artist Sir Peter Blake is to be honoured by the City of Liverpool.

Sir Peter, one of the major figures of British pop art who famously created the album cover for The Beatles’ Sgt. Pepper album, is to be made a Citizen of Honour on Sunday.

Sir Peter will receive the award on the day he celebrates the two-year extension of Everybody Razzle Dazzle, his iconic artwork for the Mersey Ferry Snowdrop, which returns to service after planned maintenance work.

Everybody Razzle Dazzle, commissioned in 2015 by Liverpool Biennial, 14-18 NOW: WW1 Centenary Art Commissions and Tate Liverpool, in partnership with Merseytravel and National Museums Liverpool, has been seen by more than 5 million people.

Originally due to end this year, the extension of the Dazzle Ferry means it can continue sailing throughout this year’s 50 Summers of Love celebrations and Liverpool’s 10th anniversary as European Capital of Culture in 2018.

Sir Peter has a long history with Liverpool, winning the John Moores Painting Prize in 1961 and becoming the first patron of the UK’s best-known painting competition in 2012. He also reprised his iconic Sgt. Pepper image with famous figures from Liverpool’s history as a centrepiece of the city’s Capital of Culture celebrations in 2008.

Lord Mayor of Liverpool, Councillor Roz Gladden, said: “I am delighted to be able to present this honour to Sir Peter Blake.

“Sir Peter has helped shape Liverpool’s cultural significance on the global stage for more than five decades – from Sgt. Pepper to Everybody Razzle Dazzle.

“His work with The Beatles was one of the seminal moments in popular art in the 20th century and 50 years on still resonates around the world as we will see with our 50 Summers of Love programme.

“”That work alone is worthy of celebration but the fact that he has continued to make outstanding contributions to the cultural life of the city underlines the depth of feeling he has for Liverpool and the city has for him.”

Sir Peter Blake said:  “I’m delighted to be given the Citizen of Honour Award. As well as my music links with the city, I’m proud of my association with Liverpool Biennial and Tate Liverpool and hope to continue my relationship with the city.

“I treasure the warmth and good humour of the people of Liverpool and hope they will accept me as an ‘Honorary Scouser’.”

Citizen of Honour Awards were introduced in 2008 to formally recognise those individuals who have enriched the image of the city and/or its citizens. Recent recipients have included James Barton, founder of Cream, and the Harry Potter and Fantastic Beasts Film director David Yates.

Ed The Campervan helping to create a new vision for Islington