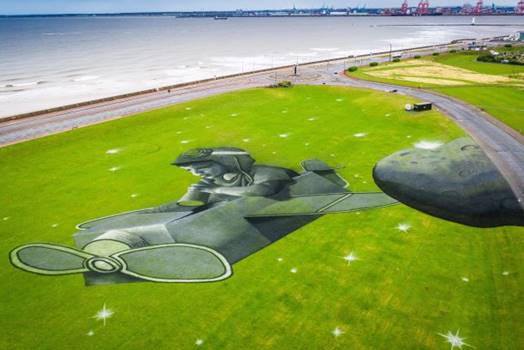 An amazing artwork by Saype has been revealed in New Brighton, Wirral. To the Moon, which depicts a child piloting a toy plane in space, is over 5,000sqm, the size of a football pitch. The artwork is part of an exciting cultural programme taking place across Wirral this September.

Switzerland-based Saype, who started his career as a graffiti artist, and his team took five days to create the image – using chalk and charcoal – on a massive scale. He specialises in large images which can be seen from above, including a recent work on the Champs de Mars by the Eiffel Tower in Paris.

To the Moon is timed to coincide with the OVO Energy Tour of Britain, which will run through New Brighton and other Wirral landmarks on Wednesday 11 September. There will be an opportunity to view the artwork via aerial footage of the race.

Funded by Arts Council England, To the Moon is inspired by the themes of exploration and discovery which define Wirral’s current year as Borough of Culture for the Liverpool City Region.

Lucy Barrow, Assistant Director for Culture and Visitor Economy at Wirral Council said: ‘It is a real coup to work with Saype on this new work, which showcases New Brighton’s waterfront to audiences around the world during our Borough of Culture year, and when all eyes are on Wirral during the Tour of Britain.’