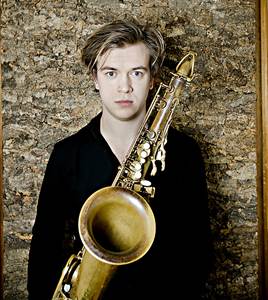 Critically acclaimed Saxophonist Marius Neset is set to make waves at The Capstone Theatre this April as he brings an extraordinary maturity, talent, energy and commitment to Jazz music, which is far beyond his tender years to Liverpool’s leading venue for Jazz and world music.

Since the release of his debut album, Norwegian Marius Neset has quickly become the most talked about newcomer on the European Jazz Scene, gaining praise from Guardian Jazz authority John Fordham and captured the prestigious JazZtipendiat Prize – awarded to a musician of outstanding capabilities. Golden Xplosion, Marisu critically acclaimed album, won 5-star reviews from the Guardian, Telegraph and Irish Times in addition to rave reviews in Danish Magazine, Jazz Special and Norway’s Jazznytt, praising both the virtuosity and musicianship of the compositions and performance.

Throughout 2011 Neset toured extensively throughout Europe, including performances at Molde, Copenhagen, Cork and Manchester Jazz Festivals as well as a hugely successful 8-date UK tour. His debut London concert at Pizza Express Jazz Club, Soho in September, was recorded for national broadcast on BBC Radio 3, and saw every major UK jazz journalist attend to see him perform to a sell-out crowd. With the standard set this high, we expect the bar to be raised by this Marius, who will be here with his quartet, featuring some of Europe’s brightest stars. This is a gig not to be missed and an exciting addition to The Capstone Theatre’s April line-up.