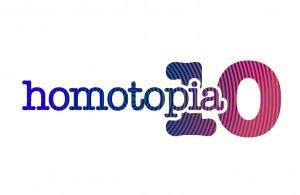 In a year dominated by the equal marriage vote here in the UK we interrogate faith and sexuality with ‘In Conversation With Terence Davies’ and Vicky Beeching and Peter Tatchell in the Diva Debate. We also look to Africa where several nations have passed or are considering anti-gay legislation with Le Gateau Chocolat and Mojisola Adebayo.

Full festival listings can be found at www.homotopia.net