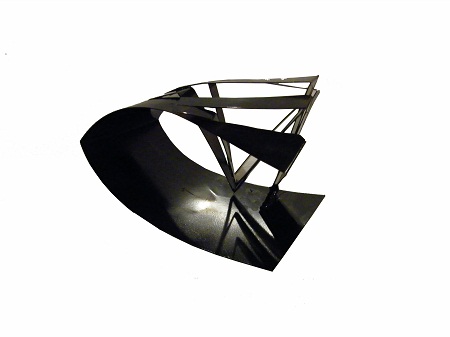 Port Sunlight Village Trust, in partnership with Arts Council England,
have commissioned local artist Claire Blakeborough to design and
create a sculpture to commemorate the centenary of the sinking of the
Titanic. After submitting three designs for the Trust, a large-scale
steel concept is set to be unveiled in ‘The Dell’ on Saturday 14th
April, nearly one hundred years to the day that this great ship met
its tragic fate.

“We have discovered a number of connections between Port Sunlight
and the Titanic. Mrs Elizabeth May Leather, a 41 year old woman who
gave her address as 28 Park Road, Port Sunlight, boarded as a
Stewardess for the White Star Line while Mr John Frederick Preston
Clarke, a popular Liverpool man who played with the Port Sunlight
Philharmonic Society, was one of the musicians who famously continued
playing amid the chaos as the ship went down. The local Lever Brothers
factory also supplied Vinolia, a luxury soap brand, to the cabin of
every first class passenger.”

Mrs Leather was lucky enough to be rescued by a lifeboat but Mr Clarke
was not as fortunate. The July 1912 print of Progress: the Journal of
Lever Brothers stated that, “Mr. Fred Clarke of the Titanic’s band
whose performances up to the last moment [will] live in the history of
the disaster, was for many years a familiar and popular ally of our
Philharmonic Society at their special concerts. Villagers will easily
recall his appearance at the Coronation Concert. Many who knew him had
a melancholy satisfaction in attending a special benefit performance
in aid of his mother and sisters which was held at the Philharmonic
Hall, Liverpool, in May.”

A memorial service for victims of the Titanic disaster was held in
Christ Church, Port Sunlight on 21st April 1912. To commemorate those
who were lost across Wirral, Claire Blakeborough’s sculpture will
capture the tragedy-stained glory that marked those unfortunate
events.

Blakeborough, a resident of Port Sunlight for over eight years now,
became artistically involved with the Village after approaching the
Trust to arrange an area within the Museum and shop to display her
artwork. The artist became inspired by her surroundings while walking
her son to school and back everyday and has since created a range of
work that focuses on the conservation site.

“I am influenced by the light and colour of Port Sunlight Village.
My drawings represent how I see Port Sunlight everyday, in every
season. The range of colours and tones throughout the Village are
incredible.

“My sculpture, however, pays tribute to the 100th anniversary of a
tragedy and those who lost their lives and takes a much darker theme
than the majority of my work. My inspiration for the piece came from
the idea of the indestructible deconstructed, with one side of the
steel sculpture intact and the other beginning to break apart,
representing the sudden downfall of such supposed strength.”

The sculpture will be available to view in ‘The Dell’ on Saturday
14th April. After its initial display, the commemorative figure will
move on a six month journey throughout the Village, pausing at various
locations and serving as a centerpiece for Port Sunlight’s vibrant
events programme.

A number of school and community activities for the public to enjoy
will be announced to coincide with the sculpture display period.