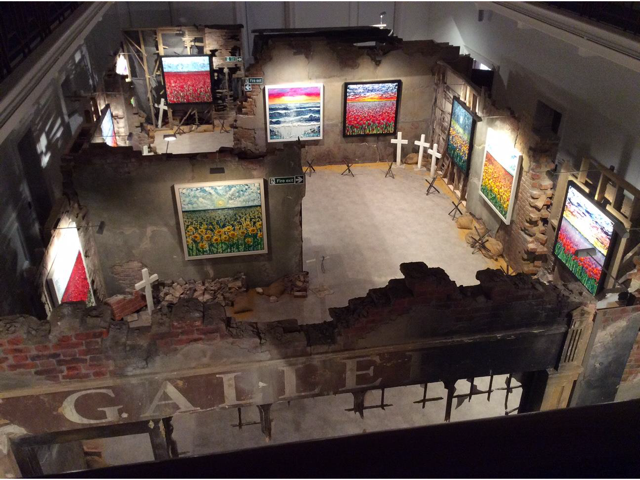 Groundbreaking visual arts exhibition, The Danger Tree, to feature at the Pier Head Village this summer

Scarlett Raven and Marc Marot’s latest exhibition, The Danger Tree, commemorates the World War I’s most iconic poets using the latest technology in augmented reality to weave poetry, animation and music into traditional art. Each painting in this poignant exhibition tells an immersive story of the soldiers who fought and fell in the Great War between 1914 and 1918.

Retuning to Liverpool’s Pier Head Village from June 30, Pier Head Village will be taking over Liverpool’s waterfront with an action-packed summer programme of culture and entertainment, which will now include a modern visual experience produced by Firebrand, the team who built the Harry Potter Experience.

Following the exhibition’s success at the Martin Luther King Jnr building at Albert Dock last year, the exhibition will make its return with a brand new painting specially dedicated to the city entitled Years Ahead. Inspired by the sinking of RMS Lusitania in 1915, the painting features the eponymous poem, read by Cold Feet actress Karen David. RMS Lusitania and her partner vessel Mauretania both came into service from Liverpool in 1907, the year of the port’s 700th anniversary celebrations with many Liverpool Irish seamen working onboard the ship, making this a moving tribute to all those who tragically lost their lives.

The Danger Tree will also return with the painting “The First & the Last” which the creators dedicate to the memory of Liverpudlian soldier Arthur Seanor and the Liverpool Pals in recognition of the role they played in the Great War and all of the local business volunteers that fought throughout the war including the battles of Arras, Passchendaele and the Somme at which over 2,800 Liverpudlian soldiers gave their lives.

As you enter the gallery, headphones and smart-enabled devices use Blippar, a world leader in the field of augmented art, to bring the exhibition to life. Simply hover the device in front of a piece of art and you will unlock the hidden interactive story inspired the original artwork. You can appreciate the beautiful brush strokes of Scarlett Raven while being inspired by digital artwork created by Marc Marot, regarded as the world’s first augmented reality (“AR”) fine artists, as legendary war poets such as Wilfred Owen, Siegfried Sassoon and Rupert Brooke poetry are narrated by British actors including Sean Bean, Christopher Eccleston and Stephen Graham, who give moving readings of the poems which inspired the work. A bespoke music score for each piece has been composed by film composer Marc Canham to really bring to life each oil painting.

“The Danger Tree is simply breathtaking. Pier Head Village is all about celebrating culture and people’s memories and this exhibition really speaks to the heart. Each piece is so intricate and the use of this latest technology is just fascinating. By featuring the exhibition for the whole summer we hope that so many more people can come to experience work of Marc Marot and Scarlett Raven.”

The collection was originally launched, to great acclaim, with a month-long exhibition in London in July 2016. After which the exhibition was relocated to Liverpool’s Martin Luther King Jnr Building at Albert Dock back in November 2016. These first two exhibitions attracted over 10,000 visitors. Being part of Pier Head Village’s summer-long programme will give visitors the greatest chance to experience this revolutionary experience.

“The response we received in Liverpool last year was incredible, so we were thrilled to be able to bring it back. Being surrounded by the historic architecture of the Pier Head and iconic waterfront seemed a fitting location to bring The Danger Tree. For us it is about celebrating our heritage we can’t wait to begin telling old stories in a new way.”

The exhibition space itself was designed as a bombed out gallery on the French / Belgium borders of 1916 by award-winning film set designer Kave Quinn, known for her work on films such as Trainspotting, Layer Cake, Harry Brown, Shallow Grave, The Woman in Black and Far From The Madding Crowd. You will be transported back to a war-ravaged village as you walk through the gallery with shattered shop fronts and broken walls, and barbed wire coupled with the sound of cannon fire in the distance.

This summer, The Danger Tree exhibition will be housed in Mann Island’s gallery space (unit 3) at the south side of the village. The exhibition will sit alongside the Liverpool Art Fair, the annual art showcase that returns for its sixth year in Liverpool, launching this Saturday in a pop-up purpose-built unit to create a truly unique experience on the waterfront.

In Liverpool Art Fair’s gallery space, local artists located within 35 miles of the city have been given the opportunity to exhibit work at the gallery. Earlier this year artists were invited to submit their best creations to a panel of experts, including Marot, who helped choose the best pieces to showcase at the Liverpool Art Fair. 270 artists submitted over 1000 submissions for this year’s fair and 100 artists have now been selected.

The Danger Tree exhibition will be displayed from June 30 until September 10. More information will be available at www.pierheadvillageliverpool.com or you can follow all of the updates with hashtag #PierHeadVillage

The Danger Tree
1 of 4
Advertisement

What the Turner Prize does to prices