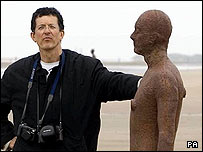 A Sensible decision – at last.

Gormley’s statues stay out to sea

The 100 cast iron men statues fixed into the sand on a Merseyside beach are to stay.

The figures on Crosby beach, collectively called Another Place, are cast from a mould of artist Antony Gormley’s body.

The artist’s installation was initially a temporary attraction, but councillors at Sefton have decided it can stay.

Mr Gormley said he was “absolutely delighted” with decision, made at a council meeting on Wednesday night.

Last year councillors refused to extend planning permission, against its officers’ recommendation, after hearing that the statues posed a danger to people and wildlife.

HM Coastguard claimed that the statues increased the risk of people wandering into soft sand and getting stuck as the tide came in.

Conservation agency Natural England claimed that bird-feeding areas had been compromised by the extra walkers.

Residents complained about traffic, cost and the “offensive” nature of the naked statues.

Another Place Ltd, which runs the exhibition, appealed against last year’s refusal.

It submitted plans with 16 statues would be moved from contentious areas.

The new approved plan also decreased the affected area from 232 to 195 hectares, and proposed strict monitoring of wildlife and visitor numbers.

Mr Gormley, who also created the Angel of the North, said: “I am absolutely delighted with the news of this decision.

“So many people in the area and outside have given their support and shared with me the sense of achievement in creating Another Place in this extraordinary setting.

“I want to thank all the people who have helped to make this possible.”