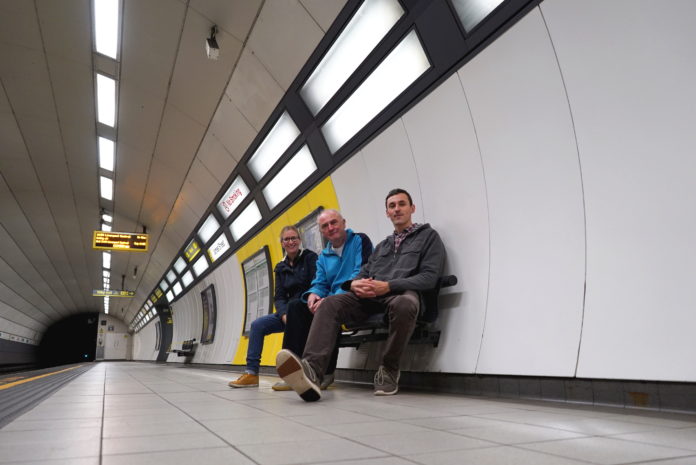 IF YOU INVENTED A GIANT MACHINE WHAT WOULD IT DO?

The people of Liverpool are being invited to participate in a community-designed art installation more than 20 metres beneath the city’s streets in the Wirral Loop railway. It will use their ideas to tell the story of the construction of a giant machine – a particle accelerator – that can create super materials, treat cancer, reveal the secrets of the universe and much, much more.

The ‘Tale of Two Tunnels’ will enable residents to explore some of the city’s ground-breaking scientific discoveries, and is being made possible by an exciting collaboration between The University of Liverpool and a number of local organisations including Merseyrail and FACT (Foundation for Art and Creative Technology) Liverpool. The first family workshop is being held on the 25 October 2018.

The Tale of Two Tunnels idea was conceived by Dr Chris Edmonds, a lecturer at The University of Liverpool, who says:

“Liverpool plays a significant role in some of the world’s largest scientific collaborations, working on questions ranging from ‘what happened at the very beginning of time’ to ‘how we can improve cancer treatment’.

“By working together to create the story of a giant machine that can change the world we want to welcome the people of Liverpool into this global community. We have a fantastic team of people helping to build the event, now we need your input.”

The Tale of Two Tunnels aims to connect residents of all ages with the world-leading science taking place on their doorsteps through a series of interactive science and art workshops which will help define a unique exhibition which residents and visitors can enjoy – and keep engaging with – for the year it’ll be open. It is inspired by the work of Liverpool scientists on the world’s biggest accelerator, CERN’s Large Hadron Collider (LHC) and will be located within the Wirral Loop Line.

The four stations on the Wirral Line – which is 9 times smaller (2 miles) than the 17-mile LHC – will be used to mirror the four detectors of the real circular accelerator. These detectors are where particles collide, having built up speed around the accelerator, and where physicists examine the collisions to discover more about the particles’ make-up, about matter and anti-matter, and what other secrets of the universe they can reveal.

The route, which includes Liverpool Lime Street station, Liverpool’s World Museum and the Victoria Gallery & Museum, will feature interactive installations. An app will enable visitors to find out more about the big questions about the universe that Liverpool scientists are exploring through particle accelerators, such as the LHC.

Professor Carsten Welsch, Head of Physics at The University of Liverpool, said: “Particle physics is our generation’s equivalent of space exploration. It has the potential to change the world.

“Earlier this year, Liverpool scientists secured a breakthrough at CERN and we are involved in the design of its successor, the Future Circular Collider. Right here in the Wirral, The Clatterbridge Cancer Centre was the world’s first hospital-based proton beam therapy facility.

“We’re already working with local schools and groups and hope more people will get involved to help create the ‘Two Tunnels’ so everyone can feel part of this exciting event.”

To celebrate The Tale of Two Tunnels’ launch, The University of Liverpool and Science and Technology Facilities Council (STFC) is holding the first public workshop during Autumn half-term on 25 October, 7-8:30pm.

Dr Derek Gillespie, Head of Skills and Engagement at the STFC, which is supporting The Tale of Two Tunnels through their public engagement fund, commented: “The benefits of science and technology research impact us every single day. Our grants allow everyone to engage with, question, interpret and enjoy science and technology in a manner that’s relevant to their lives.”

The University’s Chris Edmonds, Barry King and Laura Harkness-Brennan will be joined by the FACT learning team’s Neil Winterburn to deliver the free event, which will encourage young people and parents to explore scientific concepts in creative ways. These will be included in the final city-wide exhibition, which is due to open in summer 2019. Similar workshops and events will be delivered in local schools and in the community over the coming months.

To find out more or to book a free ticket for The Tale of Two Tunnels workshop, please visit bit.ly/2N3psBr

Andrew Marr’s Strokes of Colour collection has just over half the...