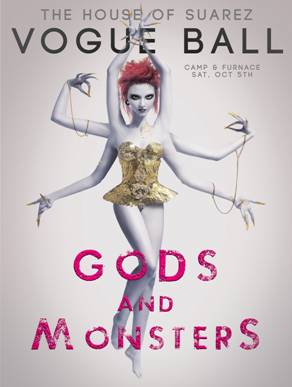 Liverpool’s multi award-winning Vogue Ball is back – and with a theme of ‘Gods and Monsters’ this year is set to be truly iconic and even fiercer than usual! The ball, which since its inception in 2010 has evolved from cult underground event to sell out sensation, will return to Camp and Furnace for its 2013 outing on Saturday 5 October.

The Vogue Ball is a dance event like no other in the UK – where club culture meets high art and Vogue teams (known as ‘houses’) come together from far and wide to compete for dance supremacy, wearing lavish and creative costumes befitting (and often subverting) the given theme.

After the debauched magic that was last year’s ‘Twisted Fairytales’ Vogue Ball locked out at Camp and Furnace, organisers House of Suarez have opted to return to the city’s most happening  venue for another catwalk spectacular reminiscent of 1970s/80s New York (the home of the Vogue dance style) at its most glamorous. This year’s ‘God and Monsters’ theme is set to challenge the boundaries of those competing.

Darren Suarez, Artistic Director of House of Suarez said: “This year’s Vogue Ball will see Camp and Furnace transformed into a powerful arena of gods and monsters! Whether you see yourself as a strong titan or transcending real life and existing in the heavens, the 2013 Vogue Ball promises to slay the weak and pay homage to the triumphant. I chose this theme for its wide scope of variety and creativity – we have all different ideas of gods and certainly monsters, from mythical creatures to people in current affairs. I want to see the vogue houses really dig deep to release these characters on the runway. I am very proud of the commitment all Houses entering have shown over the years and I feel this year they will excel even more!”

For the 4th year running the House of Suarez and renowned Liverpool image maker Matt Ford have collaborated to create the Vogue ball’s sleek signature look.

House of Suarez has irrevocably shown that the Vogue Ball is a force to be reckoned with, winning ‘Best Annual Event’ at the Seen Awards in 2011 and 2012.

This year’s Vogue Ball is certainly not for the faint hearted, it will ricochet between dark scary lands and places beyond the clouds in a decadent and debauched meeting of celestial beings, icons, men and monsters, all showing off their seedy and seductive night moves on the UK’s most messed-up catwalk show.

*NEW FOR 2013 – VIP TICKETS £26.50* (to include guaranteed seat at catwalk, glass of bubbly, use of private bar and goodie bag) (price includes booking fee)

Box Office: 0844 8000 410 Online at www.ticketquarter.co.uk or in person at TicketQuarter, Queens Square, Liverpool

(THIS IS STRICTLY AN OVER 18s EVENT ONLY)