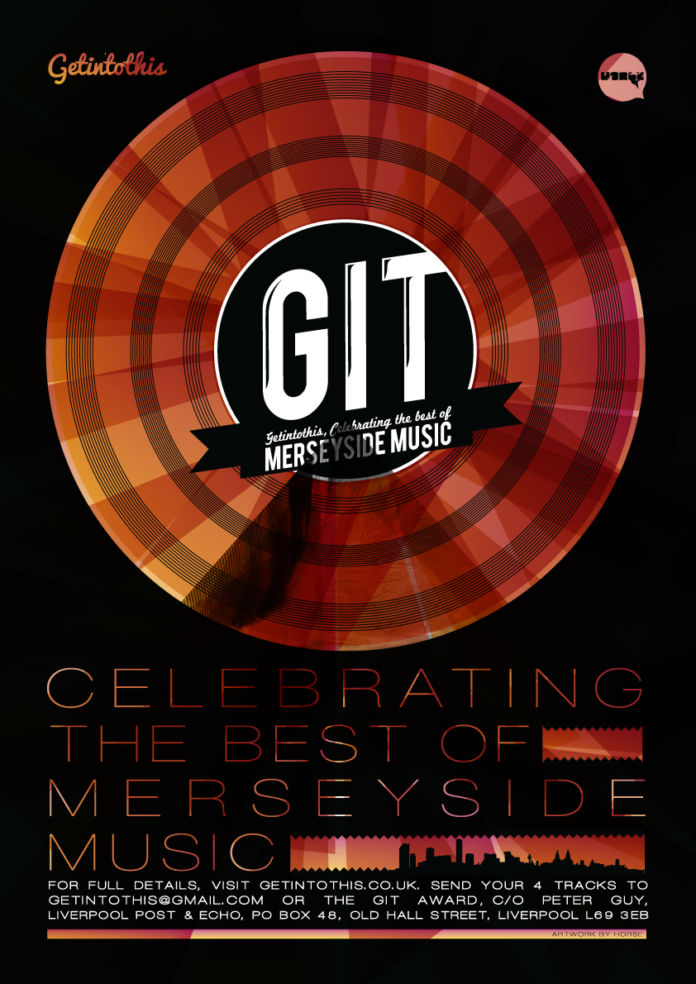 The process to find the 12 GIT Award shortlisted nominees opens today ahead of the special showcase ceremony at The Kazimier on Friday 11 April 2014.

The overall winner of the GIT Award 2014 will receive a cash prize of £1000 when revealed at the Kazimier next April.

A special Inspiration Award, recognising significant outstanding achievement in Merseyside’s music industry will also be presented. The recipients of the 2013 Inspiration Award was won by the Hillsborough Justice Collective while in 2012 the team behind Liverpool’s Kazimier club picked up the honour.

Sam Crombie, from the Kazimier said: “We’re excited to play host to the GIT Award as it takes an ambitious step forwards in 2014.”

Launched in November 2011, the GIT Award, founded by Liverpool-based blog Getintothis, is now an annual fixture on the Merseyside music scene, supported by musicians, industry figures and national media.

Matt Wilkinson, New Music Editor at NME said: “The Liverpool music scene is as thriving and eclectic as it’s ever been, but it’s vital The GIT Award recognises the artists who are striving to make such a difference. Once again I’m proud that NME is playing our part in the Award process.”

Open to all artists and bands from or based in Merseyside, the GIT Award has showcased the region’s rich musical diversity, from the thriving hip hop scene to its electronica artists, from its long-established country and roots community to punk, folk and metal.

The 2014 Award, which will be officially launched on Saturday November 16 at Leaf on Bold Street, is no different.

The GIT Award 2014 launch event at Leaf on the evening of Saturday 16 November – which is open to the public and free to attend – will premier new artists and unique collaborations by some of Merseyside’s hottest artists.

On the night, there will be an exclusive collaboration between Liverpool gothic-pop band Birdand singer-songwriter Natalie McCool.

Both artists have received huge national acclaim and will take time out from their debut UK tours to collaborate for a GIT Award exclusive.

Peter Guy, Liverpool ECHO journalist and editor of Getintothis, said: “When the GIT Award was established two years ago we had no idea how it would snowball, placing new Liverpool music at the forefront of the national consciousness and have the impact it has had.

“From the first year when GIT Award nominee Esco Williams had a MOBO Award created in his honour, to coverage of all 12 nominees across the BBC, MTV and the national print press, to last year’s blanket national radio and online coverage – the GIT Award has provided a multi-media platform for Merseyside music to thrive.

“Last year we were hugely honoured to have Yoko Ono personally invite the 2013 winners Baltic Fleet to support her at Meltdown Festival as part of the GIT Award prize – an event she curated as part of her 80th Birthday – we hope this year’s Award is equally as special and continues to place the focus on the incredible musicians working within our community.

“This year’s launch at Leaf – a venue which has supported the GIT Award since the beginning – will be a fantastic night of new music, while the Award night itself next April in the Kazimier will be one not to miss.”

Musicians, bands and creative types who would like to enter for this year’s prize are asked to send four tracks to getintothis@gmail.com or alternatively post to Peter Guy, The GIT Award, Liverpool Daily Post & ECHO, PO Box 48, Old Hall Street, Liverpool, L69 3EB.