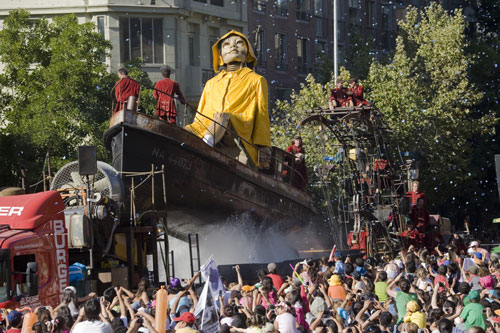 THE WORLD’S leading street theatre company is creating an event in Liverpool which will be the BIGGEST of its kind in the UK in 2012.

Since 2009, the company has attracted audiences of around 9.6million people to stunning events in Nantes, Berlin, Santiago, Antwerp and Guadalajara.

Liverpool City Council is currently working with RDL, pulling together plans for an extravaganza to welcome the giant, who has only been seen once before in the UK when she wowed 1.5million people in London at the Sultan’s Elephant event in 2006.

Talks have been taking place since 2006, when Artistic Director and founder of RDL, Jean-Luc Courcoult, visited Liverpool and was inspired by an emotional letter he saw in the Merseyside Maritime Museum written by a young girl whose father was a passenger on the tragic maiden voyage of the Titanic.

As a result, Liverpool’s ‘Sea Odyssey’ was born.

From Friday 20 to Sunday 22 April 2012 a visually stunning, free event involving the Little Girl Giant will take over the city, telling a story inspired by the Titanic.  Key city spaces will become focal points in a moving story of love, family and communication.

This is the most complex event the city has ever staged and will involve hundreds of people in its planning and execution and is set to attract hundreds of thousands of visitors to the city.   It will be one of the highlights of next year’s events in Liverpool to commemorate the 100th anniversary of the sinking of the Titanic.

Funding is yet to be finalised, but there is commitment in place for support from the European Regional Development Fund and the Arts Council England.  Culture Liverpool and Liverpool Vision are also in negotiations with partners and sponsors from the private sector to help bring the event to the city. Sea Odyssey is the final event which will use European legacy funding from the city’s capital of culture year in 2008.

This collaboration is the latest involving Liverpool city council and exceptional artists.  In 2008 La Machine took over the city by bringing La Princesse (a 50 foot spider) to the streets, and in July this year, 3D experts The Macula from the Czech Republic transformed the Liver Building by projecting incredible images on to it, marking its centenary.

Liverpool is one of five Titanic cities holding events in 2012.  The other cities are Belfast, Southampton, Cherbourg and Cobh (Co. Cork).  Visit www.titaniccities.org.uk for more information.

RDL was founded by Jean Luc Courcoult in 1979 with the ethos that theatre should be accessible to all ages and should be free.  The company who are based in Nantes has performed all over the world including Korea, Vietnam, Chile and Africa.  They have been hailed as providers of “the best street theatre in the world” by acclaimed director and writer Bernard Faivre D’Arcier.

Cities on The Edge- Events at FACT