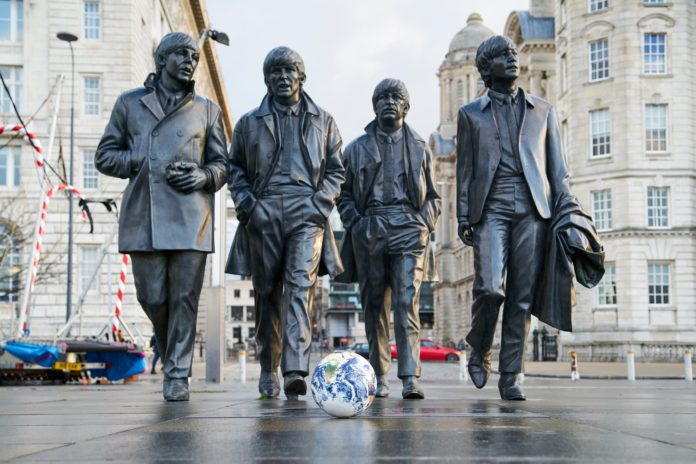 This Sunday (16 December), a special event in Liverpool will celebrate the unifying power of football and give away limited edition footballs created by a Turner Prize-winning artist.

One World is a special art commission by Mark Wallinger which marks the centenary of the First World War through football. Commissioned by Liverpool Biennial and 14-18 NOW: WW1 Centenary Art Commissions, and inspired by the Christmas Truce matches, One World is a celebration of how the beautiful game brings people together.

Football has united behind the project. Legends such as Sir Geoff Hurst, David Seaman and Bob Wilson have shared videos of themselves with the ball, Liverpool and Everton defenders Joel Matip and Mason Holgate got stuck in, and the British Army has been filming with a ball in Kabul, whilst community projects up and the down the UK have been using theirs to celebrate football’s uniting power. A clip with the ball also went viral when the women’s parliamentary football team caused a stir by playing with it in the House of Commons.

Just one example within Liverpool, the One World football has been used by a female-only team for asylum seekers and refugees from local organisation Refugee Women Connect. The team includes players from countries including Iraq, Iran, Sierra Leone, Nigeria and Albania, with the aim of breaking down cultural and linguistic barriers and bringing women together through football.

Now on Sunday, people of all ages and abilities are invited to join the artist at Chavasse Park in Liverpool ONE for a 90-minute giveaway. To take home one of the balls, just keep the ball moving for 30 seconds – you can do some keepy-ups, pass it around or try spinning it on one finger, whatever you feel like! There will also be professional freestyler there to give you some inspiration.

As well as the pop-up event, between now and Christmas Eve, 2000 limited edition One World footballs are being given to community projects across the UK, which use football to bring local people together. This is done in partnership with EFL Trust, Sport England, the Football Foundation, Sport Northern Ireland and sportscotland.

Taking his inspiration from the Christmas truce matches of WW1, Mark Wallinger says: “It is 100 years since the Armistice was agreed in 1918, and 50 years since the iconic Earthrise photograph was taken on Christmas Eve 1968; an image of a fragile world without borders. Let’s celebrate how football can unite us.”

Laura Davis on the Plinth

You Could Be A Part of a Tate Exhibit