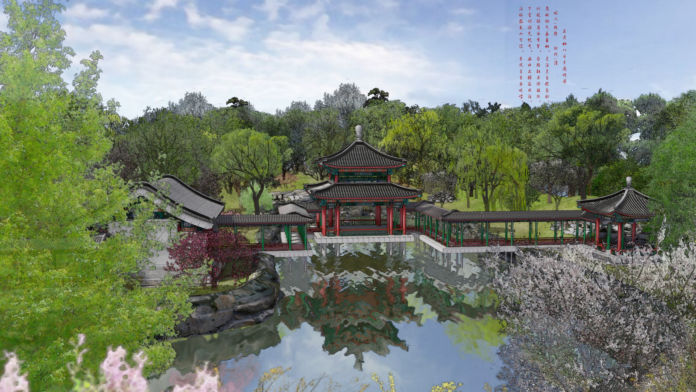 Liverpool’s View Two Gallery is this month hosting the first ever public showing in the UK of an exhibition from China showing how computer magic has re-created an Imperial Palace destroyed during the Opium Wars.

British and French Forces left the extensive Yuanminguang, the old Summer Palace, in ruins in 1860, and to this day it remains as a historic reminder of the invasion.
For more than a decade a team of academics, led by esteemed Beijing architect, Prof Guo Daiheng (Tsinghua University, Beijing) have used computer technology to show how the Summer Palace would have looked before it was attacked.
The independent gallery in Liverpool’s Mathew Street will be transformed into an Imperial garden for the weekend long exhibition from Monday, August 19 until Sunday, August 25 (daily noon until 5pm, admission is free).
Visitors will see a display of amazing pictures and illustrations showing Yuanmingyuan, and be able to watch on a large screen how computer technology has turned back the clock to show how it looked prior to 1860.

For professionals and garden planners, members of the team currently working at Yuanmingyuan as well as academics from Tsinghua University in Beijing will be on hand to discuss this important and impressive piece of work.
Prof Guo Daiheng, who since 2000 has led the research work into Yuanmingyuan and its 18th century Imperial Gardens, will address an audience at a formal opening ceremony at 7pm on Monday, August 19. The Lord Mayor of Liverpool, Cllr Gary Millar, himself a computer expert, will officially open the exhibition at this evening event.
Gallery owner Prof Ken Martin, former head of architecture at Liverpool Polytechnic said: “We are proud and honoured to be hosting the first public showing in the UK of this vitally important work. Even in their ruined state the gardens and grounds of Yuanmingyuan are impressive and magnificent. To see what the site looked like before the invasion makes you realize what the world lost. I am sure before long Yuanmingming will be declared a Unesco World Heritage Site.
“This is the second exhibition this year View Two has hosted from China, both bringing works on show publicly in the UK for the first time.”
Factfile……..
1   Construction of the Old Summer Palace began in 1707, during the reign of the Kangxi Emperor as a small gift for the emperor’s fourth son, the future Yongzheng Emperor.
2    Yuanmingyuan (Garden of Perfect Brightness) was home to five successive Qing Dynasty Emperors, away from the Forbidden City where formal ceremonies took place. In fact the emperors spent even more of their time in the gardens and issued royal decrees from there.
3    The Old Summer Palace was known for its extensive collection of gardens and buildings, known in China as the “Garden of Gardens”
4    The gardens covered an area of 3.5 square kilometres (860 acres), almost five times the size of the Forbidden City and eight times the size of Vatican City. Hundreds of structures – halls, pavilions, temples, galleries, gardens, lakes, and bridges, stood on the grounds.
5    Although there were some buildings inspired by European architecture, more than 95% of the Imperial Gardens were made up of Chinese-style buildings, with some in Tibetan and Mongol styles, reflecting the diversity of the Qing Empire.
6    In 1793, Lord Macartney presented to Emperor Qianlong astronomical instruments as a gift  from King George III. The items were displayed in Yuanmingyuan.
7    It’s destruction as a retaliatory act was ordered by then then British High Commissioner to China, Lord Elgin, son of the Lord Elgin of Elgin marbles fame.
8    It took 3,500 British troops to set the entire place ablaze, taking a total of three days to burn. Only 13 royal buildings survived intact, most of them in the remote areas or by the lakeside. The burning of the palace was the last act of the  Second Opium War
9    Unesco is continuing to consider whether Yuanmingyuan should be declared a World Heritage Site.

The National Photography Symposium 2011 – Liverpool 13-15 May