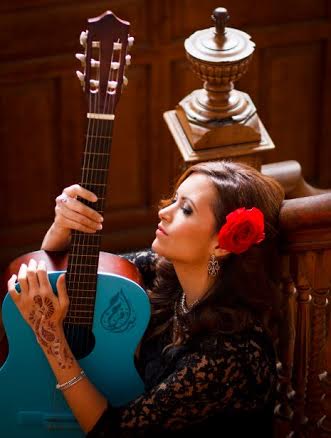 The ever-popular Liverpool Arab Arts Festival (LAAF) returns to the city for a 13th consecutive year from 7-15 June 2014 and organisers are delighted to announce the first wave of artists who will appear at this multi art form festival.

Female jazz fusion singer Farah Siraj, a music superstar in the Arab world and many European countries, visits LAAF in what is her only UK show this year, in the impressive surroundings of Liverpool’s St George’s Hall on Sunday 8 June.

Farah Siraj has a style all her own, which she describes as Arabian Flamenco Jazz. Siraj has performed at some of the world’s most prestigious platforms, including the United Nations, Nobel Prize Hall and the World Economic Forum.

Farah Siraj said: “I am very excited to be part of the Liverpool Arab Arts Festival! This festival is one of the most prestigious in Europe and I am proud to take part in it.  One of the things I most look forward to is connecting with the audience and bringing them closer to the Arab world through my music. We have an exciting program lined up and I just know it will be a special night!”

Next comes the controversial and action packed film Omar, showing at FACT on 11 June. Protagonist Omar climbs the separation wall in the West Bank to visit the woman he loves. As he attempts to elude intelligence forces, he finds himself press ganged into catching a member of the resistance. Having recently premiered at London Film Festival, Liverpool audiences have a rare chance to see it at LAAF this summer.

LAAF is also delighted to announce four gripping, funny, touching short plays about Arab women in revolution by some of the UK and Middle East’s best writers in Waiting For Summer at the Unity Theatre on 11 and 12 June. Produced by Swivel Theatre, one of the four plays has been written by renowned playwright Martin Crimp.

Sarmarda – a Diwan Theatre production, premieres at the Bluecoat on 14 June.  After their sell-out show at last year’s LAAF, Diwan return to weave lyrical storytelling with musical wiles in a new show based on Fadi Azzam’s novel Sarmada, long-listed for the Arabic Booker Prize in 2011. Far from this world lies a village effervescent with surreal magic, where sex and fantasy, transmigrating souls, potions and soothsayers conspire to bring a remarkable contemporary of the Arabian Nights. With effortless dexterity and an easy style, Louai Alhenawi and Alia Alzougbi create another explosive performance.

*Sarmada is a word created by the author, a derivative female form of the noun-verb ‘to perpetuate’ or ‘perpetual’. The title places women at the heart of this story that spans several generations, from Syria to Paris and back again.

There’s also a major exhibition commissioned by LAAF and devised especially for host venue the Bluecoat of artwork curated by  Kalimat magazine editor Danah Abdullah showing throughout the festival and extending to 29 June. Choose Your Own Adventure plays with the format found in old board games and children’s books. Arab designers are invited to imagine new worlds through one of eight prompts. Themes include transportation, the future, urbanism, lifestyle, and current affairs.

A second exhibition will also run at the Bluecoat throughout the festival from 7 – 17 June. Al Noor- Fragile Vision has been created for LAAF in collaboration with DaDaFest, British Council and Arts Council England. Rachel Gadsden’s methodology of creative engagement and delivery articulates the notion that, whilst acknowledging political and religious differences, arts and culture can serve to promote a common ground for discourse and development. Her work explores themes of fragility and resilience, and the universal and deeply positive desire to survive. Countries involved in this exhibition include Bahrain, Oman, Saudi Arabia and Qatar. This event is a series of workshops which will lead to a complete exhibition later this year.

Boasting a huge range of events, the 9 day long festival will take place at various high profile venues across the city including the Bluecoat, FACT, Unity Theatre, St George’s Hall and Sefton Park Palm House. This year LAAF will coincide with Liverpool’s International Festival for Business.

This eclectic festival will cover a plethora of cultural mediums and genres, with family activities, visual arts, film, performance, music, dance, food, 2 book launches and interactive workshops. People of all ages and cultures will find something to interest them.

Choose Your Own Adventure

The Museum of Liverpool reopens to the public on Monday