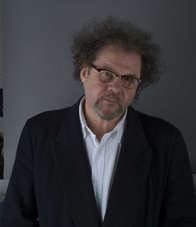 As part of the forthcoming display DLA Piper Series: This is Sculpture (From 1 May 2009), acclaimed film director Mike Figgis is working with Tate Liverpool and Tate Media on a series of short films that focus on conversations with people from Liverpool about works of art in the Tate Collection.

Four works of art from Tate’s Collection will be taken into separate locations around the city, including the hardware store, Rapid, and Liverpool University’s Guild of Students, where members of the public will be invited to talk about the works in these new contexts. The artworks featured in the project include Marcel Duchamp’sFountain (1917, replica 1964), and Carl Andre’s 144 Magnesium Square (1969) which will go on display at Tate Liverpool as part of DLA Piper Series: This is Sculpture. Filmed throughout 2009, these short films will be displayed alongside the works in the display at Tate Liverpool, on the Tate website (www.tate.org.uk) and screened on Channel Four as part of the 3 Minute Wonder series later in the year. The films will be produced by Tate Media and Red Mullet.

Figgis’ innovative approach to filmmaking and his long-standing interest in the visual arts means he is well-placed to engage a variety of people from Liverpool with work from the national collection of modern and contemporary art. By focusing on ‘non-institutional’ voices the films will reveal the meaning of art as open-ended, multiple and informed by the context it is presented in.

Speaking about the project Mike Figgis said “The thing that is most important to me is that these films are a way of demonstrating that art can be discussed, and that the discussion of a work of art is as important as the art itself. I wanted to get out of the atmosphere of the gallery with its own protectionism. My hopes are that, and it being Liverpool I think won’t be disappointed, there will be some lively talk, and the people who genuinely love and appreciate and understand the work will be able to convince the doubters. I believe that a strong work of art will have resonance regardless of where it is or what happens to it.”

DLA Piper Series: This is Sculpture takes an ambitious and revolutionary look at the history of modern and contemporary sculpture. Cultural figures have been invited to co-curate sections of the display. Transforming the first and second floor galleries are artist Michael Craig-Martin; designer Wayne Hemingway and his son Jack; and artist, director and writer Tim Etchells. The display is sponsored by DLA Piper and admission is free.

Parr Street Studios Hotel and a bit of White Magic

Doctor Who Exhibition Comes to Seacombe

Unity Theatre announces rescheduled opening and extends its Out Of Space...