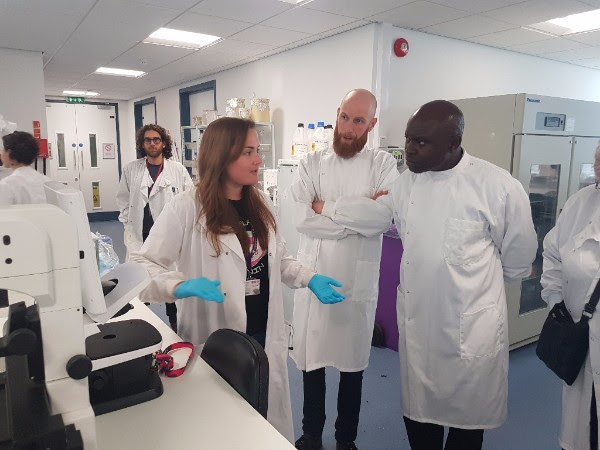 Two of the team at Africa Oyé, Liverpool’s largest celebration of African music and culture have taken an exclusive behind the scenes look at the city’s cancer research labs.

Gad Kuju and Dave McTague from the Sefton Park festival were invited by North West Cancer Research to find out more about the life-saving cancer research the charity supports.

Led by leading scientist Dr Shankar Varadarajan, they were given a tour of the facilities at the North West Cancer Research Centre, based at the University of Liverpool.

Dr Varadarajan also explained the importance of his ground-breaking research which is looking at how a new class of drugs could have the potential to kill cancer cells and inform effective future treatments for patients.

Gad Kuji, Chair of the board of Trustees of Africa Oyé, said: “It was a great honour to be asked to visit North West Cancer Research’s laboratories. It was eye-opening to see the work which is being carried out right here in Liverpool which will help find better treatments for cancer.

“Many of us know someone who has been affected by cancer in some way, which is why this research is so important.

“We were pleased to be able to align ourselves with North West Cancer Research at this year’s 25th anniversary festival, helping raise awareness of cancer and cancer research.

“Our festival unites people from all walks of life through a celebration of African music and culture. Unity is equally important in the fight against cancer, by working together as a community we can help make a difference in this challenge.”

North West Cancer Research has committed to funding more than £13million worth of cancer research over the next five years. £3.8million of this has already been committed for work at the University of Liverpool.

Alastair Richards, CEO, North West Cancer Research, said: “It was great to welcome Gad and Dave to our labs and share with them just a small part of the research we are enabling here in Liverpool.

“Being involved in Africa Oyé for the first time ever this year, was a huge honour. We were able to share the work we do and the vital role that research plays in the fight against cancer, with hundreds of people in the city region.

“I hope Gad and Dave enjoyed their lab tour and we look forward to working with them and the festival over the next few years.”

Liverpool Passion Plays to Return in 2014

A Win for the Williamson! Davy and Kristin McGuire to Exhibit

‘Love Not Fear’ project calls for creatives’ hopes and visions of...